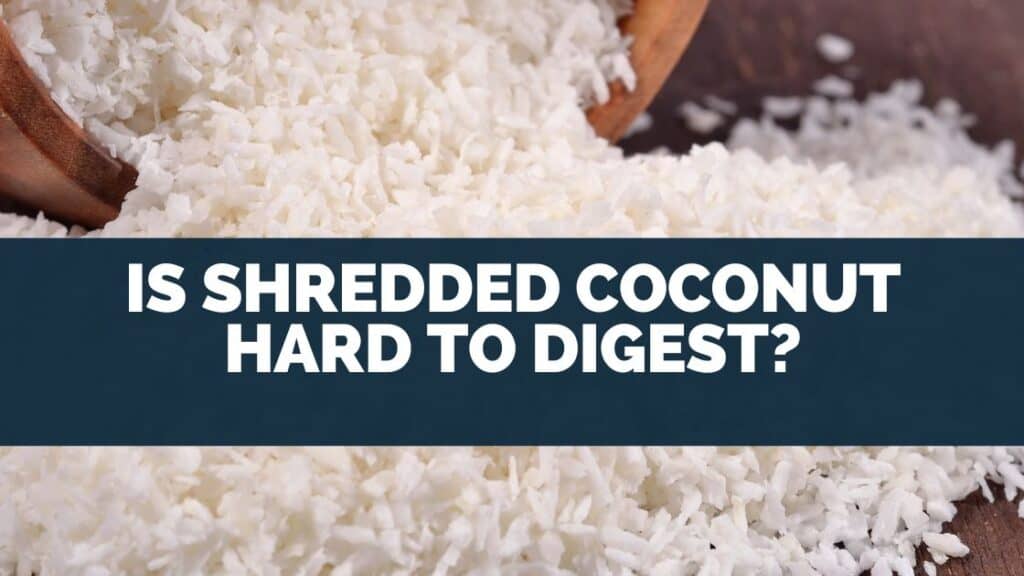 Shredded coconut is a versatile ingredient that can be used in sweet and savory dishes alike.

While most commonly associated with desserts like cakes and cookies, shredded coconut can also be used to add flavor and texture to savory dishes such as curries and stir-fries.

It is also a popular topping for breakfast cereals and yogurt.

No. Shredded coconut can even be added to your weight loss menu.

It is rich in fiber and medium chain fatty acids (MCFAs).

MCFAs are a type of saturated fat that is easier to digest than animal fats.

The MCFAs in coconut are associated with fat burning, so eating shredded coconut regularly and in moderation can help with weight loss.

Besides being beneficial for digestion and weight loss, shredded coconut is believed to be helpful for heart health.

Each ounce of shredded coconut contains 187 calories and provides 4.6 grams of fiber per day.

It aids in tissue maintenance and disease prevention, as well as preventing hunger between meals.

It also aids in the prevention of constipation, indigestion, and hemorrhoids.

One ounce of dehydrated coconuts can contribute 0.94 milligrams of iron intake, and this amount is equivalent to 12% of the recommended daily iron intake for men and 5% for women.

Most of the fiber is insoluble, which means it cannot be digested.

This fiber helps to move food through the digestive system, which improves gut health.

In addition, coconut has a high-fat content, which can help the absorption of fat-soluble nutrients such as Vitamins A, D, E, and K.

Go to top
Table Of Contents hide
1 Can Coconut Cause a Digestive Problem?
2 Can Shredded Coconut Cause Diverticulitis?
3 Does Coconut Make You Bloated?

Can Coconut Cause a Digestive Problem? 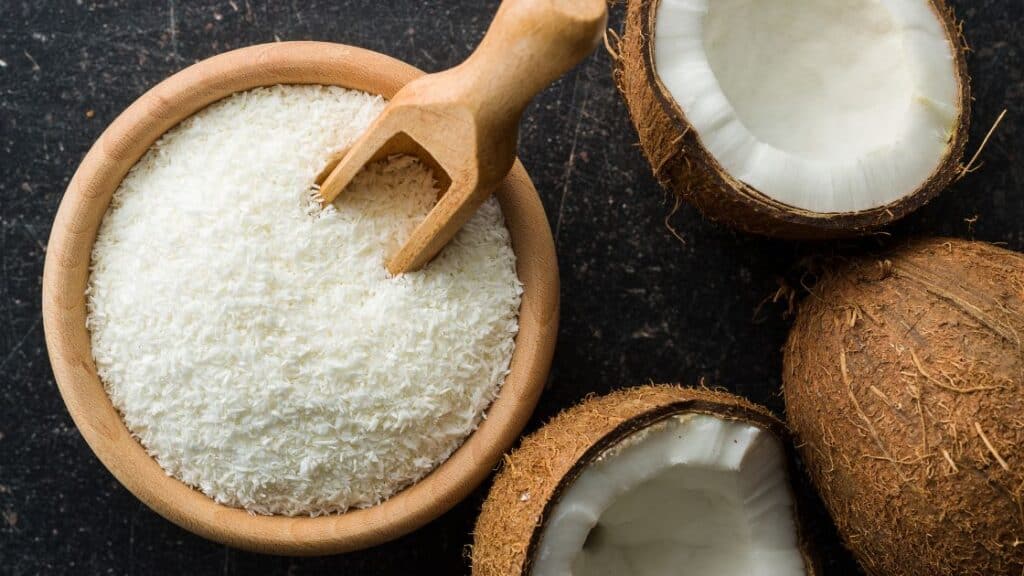 Yes, if you consume it in excess.

Coconut contains fructose and high-fat content, which can irritate the stomach.

However, stomach pain after eating coconut could indicate other health conditions such as fructose intolerance, irritable bowel syndrome (IBS), or gallbladder issues.

If you suffer from diarrhea after drinking coconut milk, it could be due to the sweetener or thickener in coconut milk.

Refrigerated coconut milk usually contains additives that can interfere with your digestive system.

The gelling and thickening agents can cause diarrhea, gas, and bloating.

Sweeteners containing sugar alcohols such as maltitol, lactitol, sorbitol, and mannitol can cause diarrhea and bloat.

If you are worried about digestive problems, pay attention to the coconut milk content, and avoid products containing synthetic flavors and added sweeteners.

Coconut, either in the form of oil, milk, or meat, can cause other digestive symptoms such as diarrhea or stomach cramps, especially if you suffer from Irritable Bowel Syndrome (IBS).

Coconut products can be aggravating or friendly to IBS sufferers depending on the amount of consumption.

Some of the coconut products in the following amounts are low in FODMAP (Fermentables, Oligosaccharides, Disaccharides, Monosaccharides, Polyols) diets that are safe for people with IBS:

In addition to containing dietary fiber, shredded coconut also contains phosphorus and potassium. 1/2 cup serving of shredded coconut is considered high in polyols, one of the types of FODMAPs.

If you do not want to worsen IBS symptoms, consume shredded coconut in low quantities.

Consumption in low amounts can provide the benefits of dietary fiber without worsening IBS symptoms.

Since coconut oil is fat, it contains no FODMAPs. On the other hand, consuming too much fat can strengthen intestinal contractions, a symptom to avoid if you have IBS.

Coconut oil is a good source of healthy fats, but it should be consumed in moderation to prevent aggravating IBS symptoms.

Coconut milk is a good choice for people with lactose intolerance and IBS.

However, coconut mics containing guar gum can cause digestive problems.

Guar gum is a stabilizer commonly used in coconut milk, and its purpose is to stabilize and make coconut milk creamy and smooth.

Although guar gum is safe for consumption for most people, its consumption should still be limited.

It can trigger allergic reactions in some people and cause digestive problems such as bloating and gas.

Can Shredded Coconut Cause Diverticulitis? 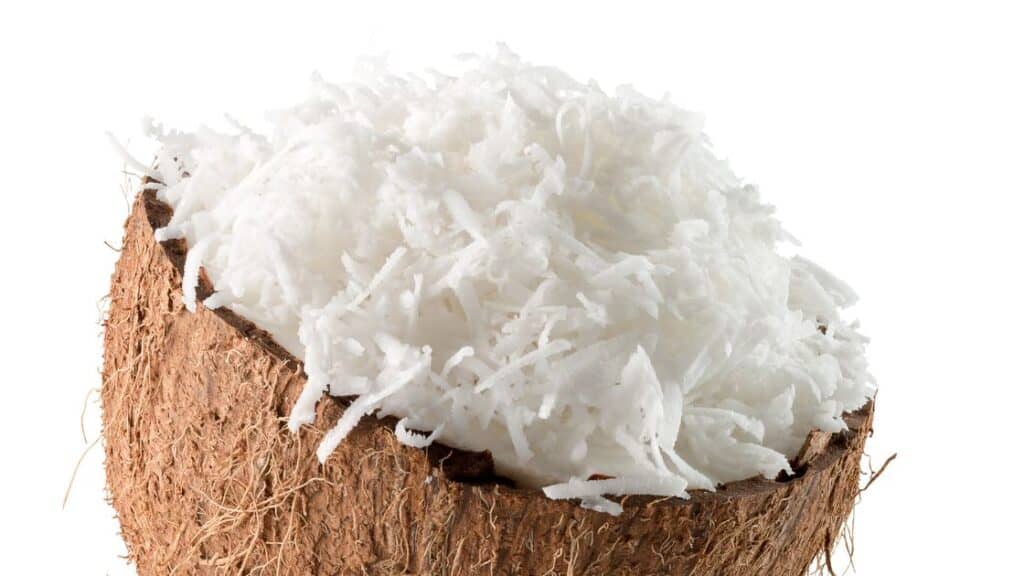 Coconut contains fiber that the body cannot digest, and dried or fresh coconut is one of the foods high in fiber.

However, that doesn’t mean you must eliminate certain foods, especially shredded coconut, from your diet.

When diverticulitis symptoms recur, you need to restrict your diet.

Lack of fiber in the body can cause straining during bowel movements.

As a result, new diverticula will form, irritating the previously formed diverticula.

When symptoms of diverticula appear, such as abdominal pain, vomiting, fever, nausea, and so on, switch to a liquid diet for two to three days.

This diet helps the intestines to rest.

Since coconut is ideal for high-fiber diets, it is discouraged in both clear liquid and low-fiber diets.

When the diverticulosis condition has improved and is under control, consume coconut in moderation as a garnish.

However, recently some experts have stated that the treatment of diverticulitis is different for each individual.

For some people eliminating certain foods, such as shredded coconut, can help improve the condition.

On the other hand, some people’s condition can improve without removing certain foods.

Several other studies have stated that a low-fiber diet can increase the risk of diverticular disease, along with different unhealthy lifestyles such as smoking, low physical activity, and high meat intake.

However, it is essential to know the difference between preventing the risk and treating the recurrence of diverticulitis.

High-fiber diets may worsen the symptoms of diverticulitis when it recurs. F

Does Coconut Make You Bloated? 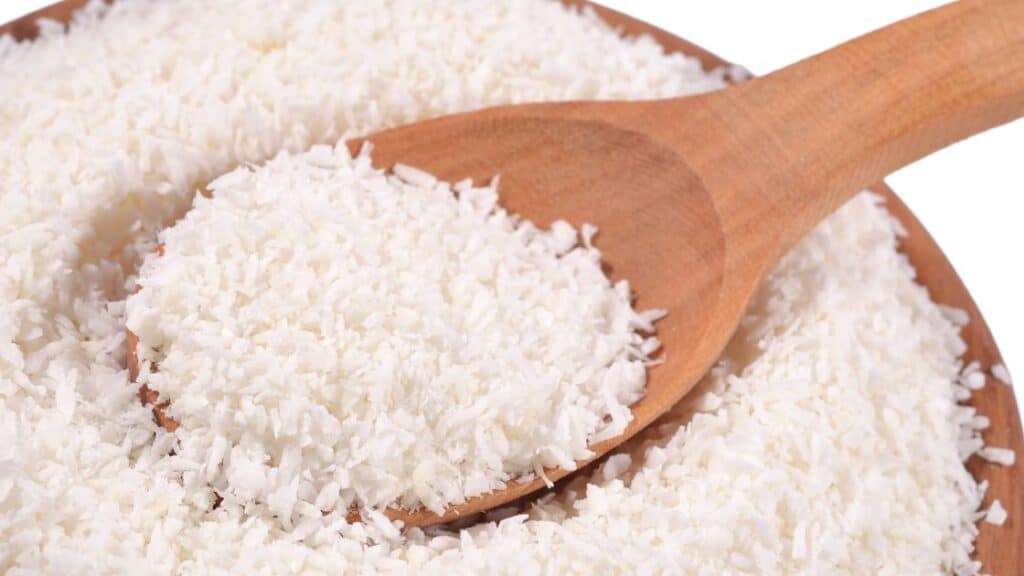 Yes, if you eat it in excessive amounts, coconut will cause bloating because of the fiber and fructose content in it.

Fructose cannot be digested in the small intestine, so excessive consumption will cause digestive problems, one of which is gas.

In addition, coconut contains a high water content, so it attracts water when digested.

As a result, you may experience symptoms of bloating and gas.

Furthermore, the content of additives and sugar alcohols in coconut milk can cause bloating.

Bloating after consuming coconut can indicate that you have fructose intolerance.

It is a condition in which your body cannot break down fructose properly.

Fructose is a natural sugar found in vegetables, fruit, and honey.

Fructose malabsorption (FM) is a digestive disorder characterized by a disruption in fructose transport across the small intestine.

As a result, the amount of fructose not digested by the gut increases.

This accumulation causes an overgrowth of bacteria in the small intestine, reducing water absorption into the intestines.

Drinking large amounts of coconut water at once can cause a buildup of water in the stomach, and this causes the stomach to stretch and causes bloating.

Guar gum is a food additive that works as a thickening and stabilizer in canned coconut milk to make the product creamy and smooth.

Guar gum is well known for its ability to thicken and stabilize food products, but it may also provide some health benefits.

Several studies show that it has several health benefits, such as maintaining weight, sugar, cholesterol levels, and digestion.

Guar gum can support digestive tract health due to its high fiber content.

It has been shown to relieve constipation by speeding up movement through the intestinal tract.

Furthermore, it can act as a prebiotic that can increase good bacteria growth and reduce harmful bacteria in the gut.

Guar gum can also be used to treat IBS, and it has been shown to reduce bloating symptoms and increase the frequency of bowel movements in some people.

However, consuming guar gum in large quantities can have adverse health effects.

The FDA has set a maximum level of use for guar gum in various food products.

The maximum amount for processed vegetable juices is 2%, and coconut milk has a maximum guar gum content of 1%.

A 1-cup serving can contain a maximum of 2.4 grams of guar gum.

Several studies have shown no significant side effects in consuming guar gum up to 15 grams.

However, if side effects occur, they are usually mild digestive symptoms such as cramps, diarrhea, gas, and bloating.

In general, the content of guar gum in coconut products is safe for most people.

However, some people should limit their intake as it can trigger allergies and digestive symptoms such as bloating and gas.