Turkey bacon is a type of bacon prepared from turkey meat that is commonly consumed in religious settings where the use of pig meat is prohibited.

Low in carbohydrates and high in fat, turkey bacon is typically made from turkey breast meat.

However, the process of curing and smoking the meat adds additional fat and calories.

In addition, many brands of turkey bacon contain added sugars and other carbohydrates.

As a result, it is important to read the nutrition label carefully before purchasing turkey bacon.

When following a keto diet, it is best to stick with pork bacon or opt for another high-fat, low-carbohydrate alternative.

Despite frequently being seen as a low-fat alternative to traditional bacon manufactured from pork, turkey bacon can also contain significant amounts of fat.

The nutritional profiles of 1 oz of each type of bacon are compared here.

As you can see, turkey bacon is high in fat and low in carbohydrates, making it one of the ideal keto-friendly pork bacon substitutes.

The keto diet is a high-fat, low-carbohydrate diet that has been shown to offer numerous health benefits.

When following a keto diet, your body enters a state of ketosis, whereby it becomes increasingly efficient at burning fat for energy.

This can lead to rapid weight loss, as well as improved mental clarity and decreased inflammation.

In addition, the keto diet has been shown to lower blood sugar levels and improve cholesterol levels.

As such, it is an effective way to manage or prevent diabetes and heart disease.

Furthermore, the keto diet has also been shown to have benefits for brain health, with some studies suggesting it may help to protect against Alzheimer’s disease.

Go to top
Table Of Contents show
1 What Kind Of Bacon Is Keto?
2 Is Turkey Keto Approved?
3 Is Turkey Bacon Good For Weight Loss?

What Kind Of Bacon Is Keto? 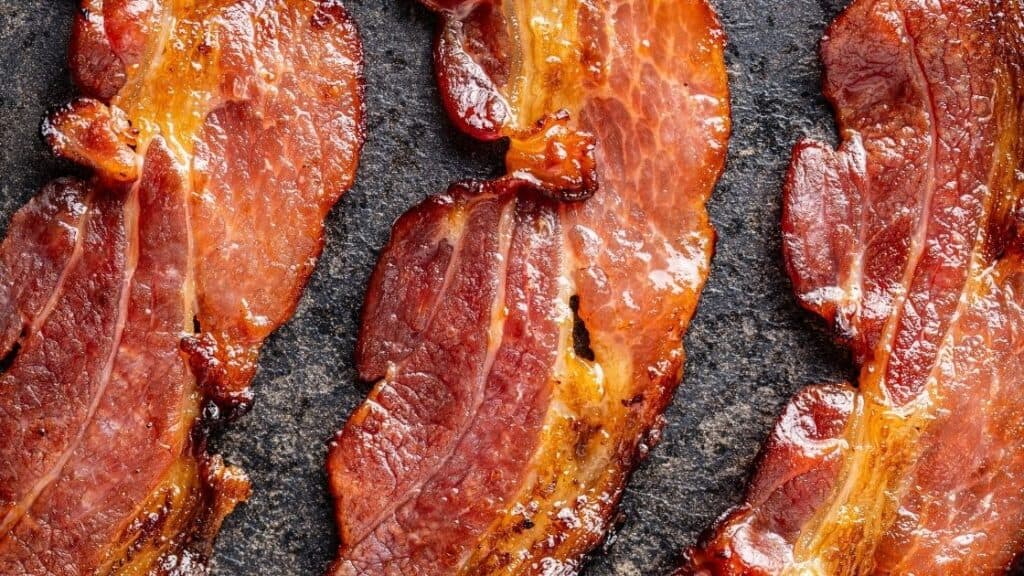 Bacon of any form is usually considered keto-friendly since it is made from meat that is high in fat and low in carbs.

Vegetarian or vegan bacon, on the other hand, is not keto-friendly and it is low in fat and rich in fiber and protein.

However, the fat content varies by type of bacon, with pork bacon having the greatest fat content, followed by goat and turkey bacon.

Fat content varies depending on how the meat is cured or smoked by different brands on the market.

Some of the most commonly found bacon types are as follows:

It is one of the most popular forms of bacon in America, often known as streaky bacon (because of the lengthy trail of fat that runs parallel to the rind) and side bacon.

It’s made with pig belly, cured in salt, then smoked.

It has a rich, smokey, and crispy flavor and texture.

This bacon is frequently used as a pizza topping and in English Breakfast, where it is cut into spherical shapes.

They are sliced from the pig’s loin (back).

It is cured and smoked to taste like ham and has way fewer calories than American-style bacon.

Slab bacon is a huge slice of cured and smoked pork that still has the rind on it.

It has a crispy exterior and is as soft as meat on the inside, with a strong smokey taste.

It is classic Irish breakfast meat.

It has a circular form and is sliced from the pig’s loin. It has a coating of fat around the borders.

Pancetta is famous Italian-style bacon made from thin slices of pig belly.

This is prepared by curing in salt and drying it, so it may be enjoyed raw as well.

The spice combination used in the curing of speck is often crushed juniper berries.

The meat is taken from the pig’s leg, similar to ham, and so has more muscle.

It has a powerful flavor and is created by brining it, smoking it, and air-drying it.

This meat is made from pig cheeks.

They have a strong flavor and are a common meat style in soul food (an ethnic cuisine of African Americans).

The jowl is often cured and smoked, while its cured, non-smoked counterpart is known as Guanciale.

This bacon is created with a combination of light and dark turkey meat, including the skin, to which spices are added and pressed into thin slices resembling American-style bacon.

It has a comparable fat-to-protein ratio. 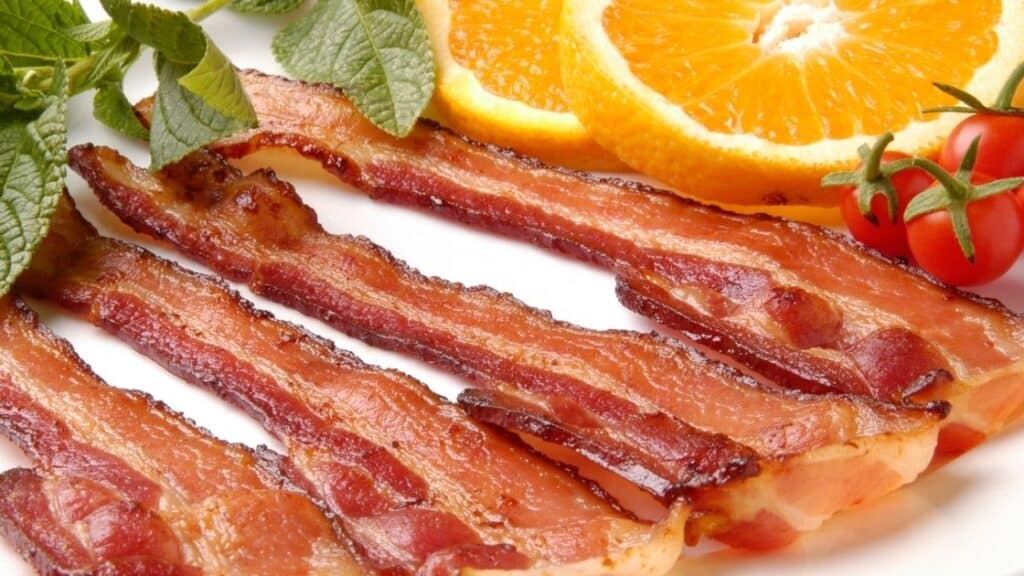 Turkey is naturally a keto-friendly food as they are high fat and low carb in nature.

However, turkey bacon is frequently classified as dirty keto.

Despite having less calories than pork bacon, they are just as processed, with a lot of added sugars and artificial preservatives.

Dirty keto would satisfy the keto diet’s high fat intake and low carb intake, but it could also lead to a high intake of unhealthy nutrients like sodium, trans fats, and nitrites (chemical preservatives), putting you at risk of high blood pressure and cholesterol, eventually leading to heart disease.

It also decreases the intake of micronutrients required for proper bodily functioning.

As a result, dirty keto raises the risk of inflammation, weight gain, diabetes, and cancer.

For the healthiest possible outcome: 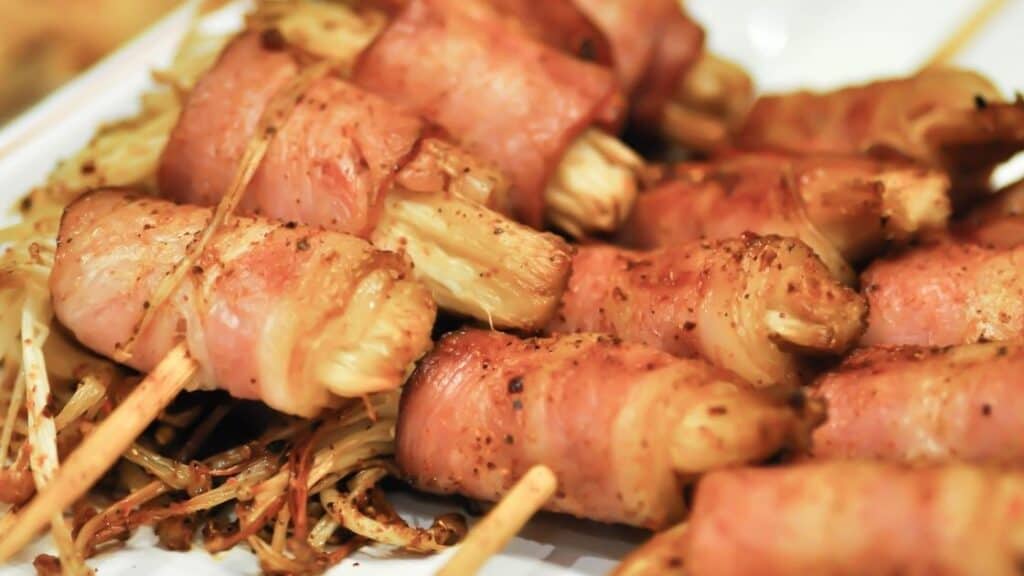 In comparison to hog bacon, turkey bacon is unquestionably a superior option for lowering calorie consumption and attaining weight reduction.

Turkey bacon has around 25% fewer calories and 35% less saturated fat than pork bacon.

However, it is still a high-calorie food, with around 30 calories from fat per slice of bacon.

And since it is also heavily processed, it should be taken in moderation.

Regardless, it is critical that you consume 500-1000 fewer calories per day than you burn during your weight loss journey, which is deemed a safe and effective technique for losing 1-2 pounds each week by the Centers for Disease Control and Prevention (CDC).