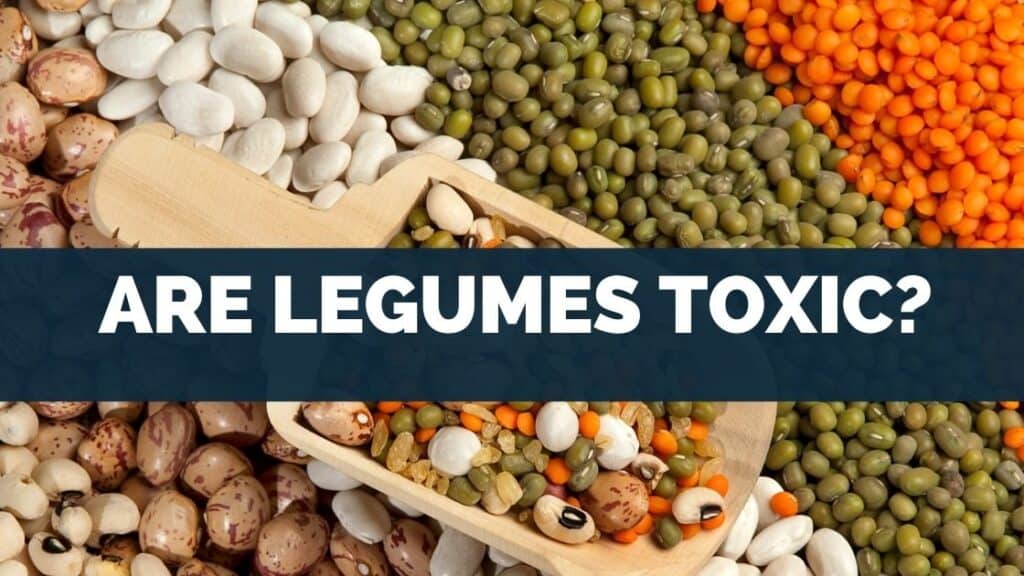 There are various foods that can be toxic when consumed raw, or if eaten at all.

I was doing some research into the health benefits of legumes and was curious whether they had any sort of toxicity for humans and here’s what I found.

Some legumes can be toxic if consumed raw.  Beans, in general, are considered the most toxic when consumed without cooking.

But, some legumes such as peas, green beans, and peanuts are actually healthier when raw.

Otherwise, they can cause diarrhea or vomiting even in small amounts.

The reason is that there are toxins present in dried beans.

Go to top
Table Of Contents hide
1 What Kind of Toxins Are Present in Legumes?
1.1 What beans can you eat raw?
2 How Can These Toxins Be Removed From Legumes?
3 How Do You Remove Tannins From Legumes?
4 How Do You Soak Beans To Reduce Phytic Acid?
5 Should You Add Vinegar to Soaking Beans?
6 Why you should not eat beans?
6.1 Can you put on weight by eating beans?
7 Are beans good for belly fat?
7.1 How many beans can you eat and still lose weight?

What Kind of Toxins Are Present in Legumes? 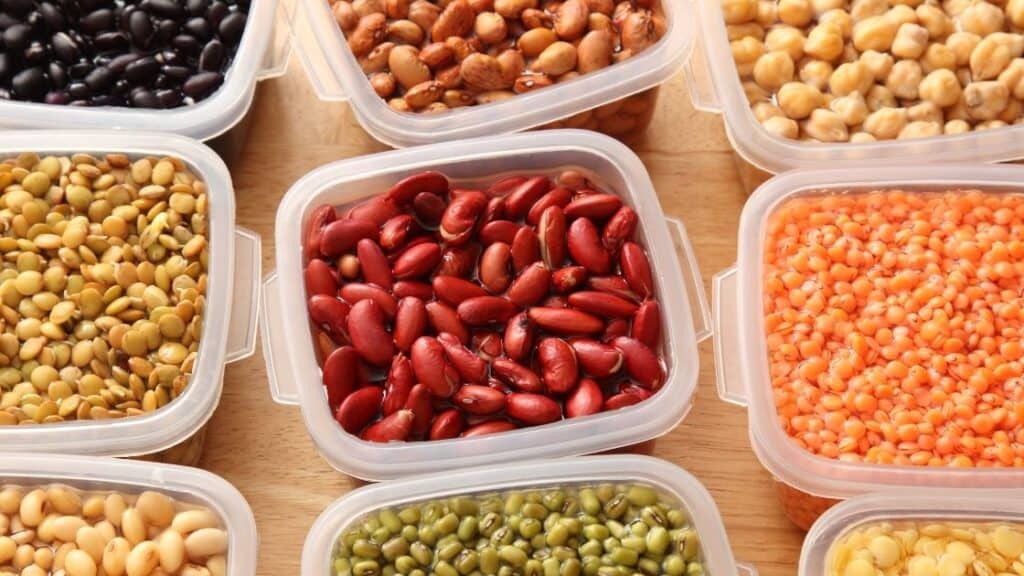 So, there are toxins present in legumes, but what exactly are they?

Certain legumes such as peas, and peanuts do not contain toxins.

However, common beans such as kidney beans, and red beans contain Phytohaemagglutinin.

When consumed in small amounts it can induce diarrhea and vomiting.

Over vegetables that are known to be poisonous when raw are rhubarb, the stems and leaves of tomatoes, and the berries of asparagus are also poisonous.

However, all of the toxins found in legumes can be removed by soaking and cooking them.

What beans can you eat raw?

Generally, only green beans and peas can be eaten raw. All other beans are starchy and hard to digest.

It is recommended that you always cook beans to make them easy to digest and improve the taste.

How Can These Toxins Be Removed From Legumes? 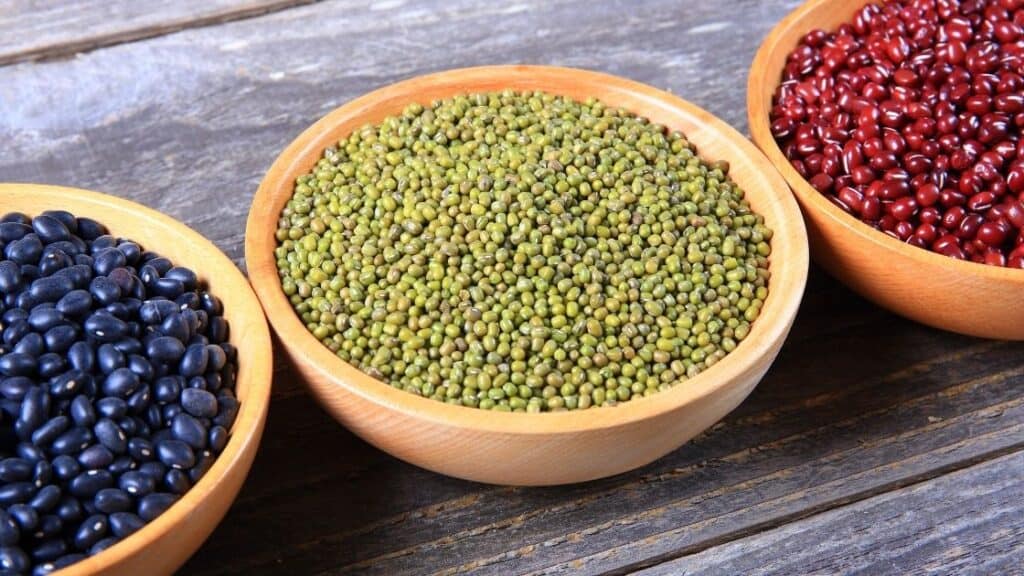 Generally, you should soak them for a minimum of 5 hours, and then boil them at high temperature for 10 minutes.

Avoid slow cooking them or boiling them at low temperatures as it won’t remove the toxins.

Tinned beans that you buy in the store are cooked before they are canned and therefore you only need to heat them up or you can eat them cold, for example in a salad or put in the blender and made in a bean dip or hummus.

How Do You Remove Tannins From Legumes? 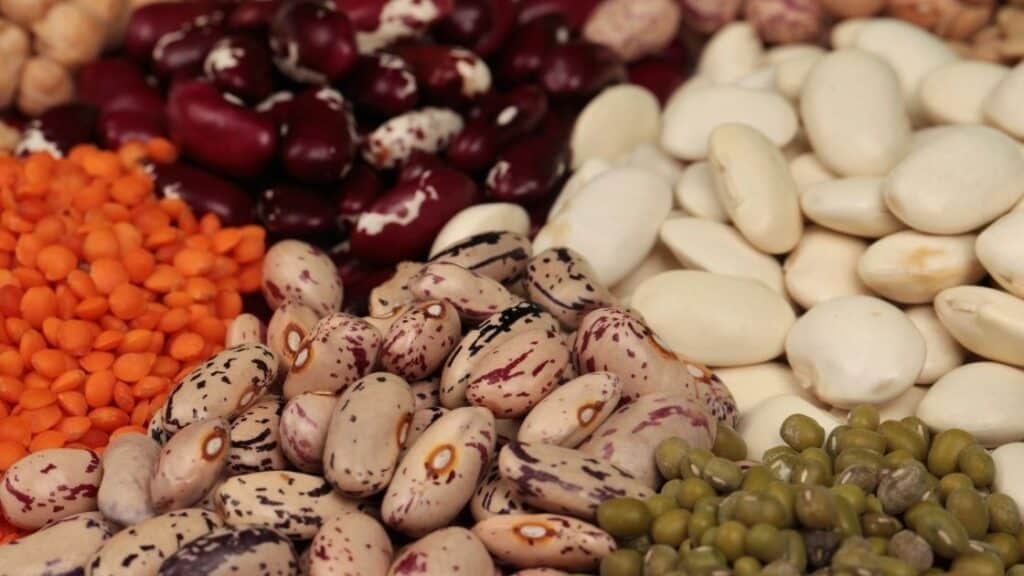 Tannins are present in legumes.

Tannins add a bitter taste to legumes, and can also cause stomach discomfort.

So, it’s recommended to remove them.

Soaking legumes for 5 hours and then boiling them on a high heat for 10 minutes will remove the tannins from legumes.

For example, there are tannins present in grape skin which gives them a bitter taste.

Tannins are most notably found in:

It’s thought that the word tannin comes from the use of bark to tan animal hides to make leather.

How Do You Soak Beans To Reduce Phytic Acid? 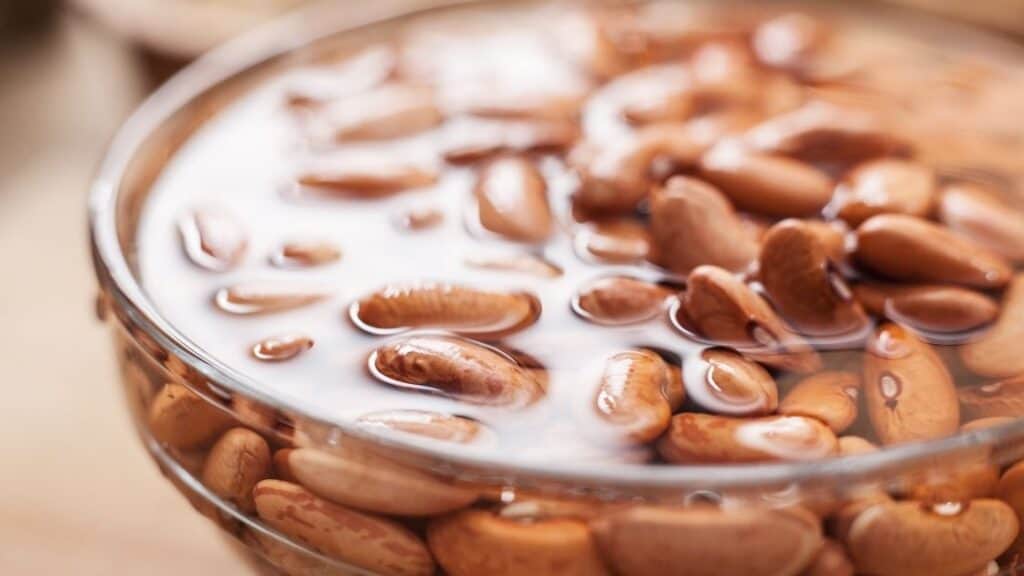 You can remove the phytic acid by soaking them.

So, I was curious about what the best method is.

I looked at what’s recommended and here’s what I found.

Soak the beans in water for a minimum or 5 hours.

After that simply drain the water, and rinse the beans in a colander.

It’s also necessary to boil the beans on high heat for 10 minutes.

Do not slow cook beans as the beans can give you diarrhea or induce vomiting.

Phytic acid isn’t unhealthy for you and interestingly is removed by soaking.

Certain beans like mung beans can be sprouted which removes some of the phytic acids.

Should You Add Vinegar to Soaking Beans? 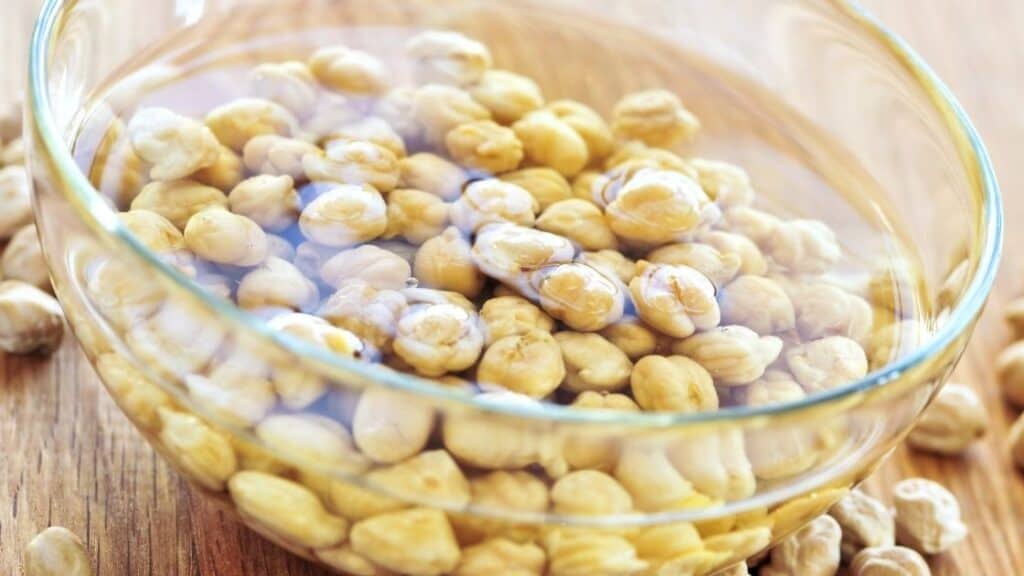 Vinegar is used in a range of ways, and I remember someone adding vinegar to soaking beans and was curious what it does, and if it’s necessary.

As a general rule, you do not need to add vinegar to soaking beans.

Adding vinegar is best done a few minutes prior to draining the water after the beans have been soaked for a minimum of 5 hours.

The acid in the vinegar breaks down some of the plant matter, gives beans a shiny appearance, and is a flavor enhancer.

It also adds a bit of flavor similar to how a vinaigrette is used as a salad dressing.

Certain foods have a high glycemic index that can spike blood sugar levels.

And it has been shown to alleviate the symptoms of type 2 diabetes. Therefore, you may be wondering whether beans and other legumes are low glycemic.

I wrote an article that covers the legumes with the lowest glycemic index.

Why you should not eat beans? 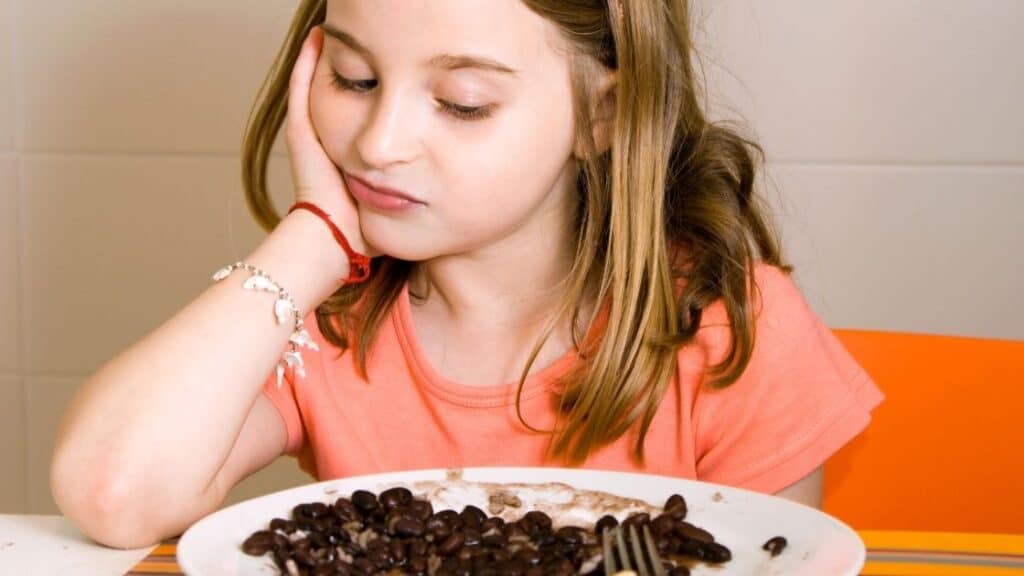 In certain cases, it can make sense not to include beans in your diet.

So, below I’ll cover when you should not eat beans.

Overall, you should not eat beans if you are expecting to spend uninterrupted time with other people.

The reason is that beans naturally induce flatulence, which causes discomfort to not release.

If you are required to be around others uninterrupted you won’t be able to take a break to release it.

Most of the time it’s fairly easy to just duck out and take a bathroom break.

But, if you’re giving a speech, or receiving an award for an example you can’t always take a break at your convenience.

The gas that beans give you typically occurs 30 to 60 minutes after you eat them.

Where you will need to pass a large amount of gas every 30 minutes to an hour.

This can be very inconvenient especially in an office setting.

So, it’s best to limit when you eat large amounts of beans to times when you know you’ll be able to release the gas safely.

Can you put on weight by eating beans?

Weight gain is caused by an excess amount of calories.

Beans contain around the same calories as most foods.

Exceptions are incredibly sugary foods such as donuts. Which are very calorie-dense.

Therefore, if you eat only 1 or 2 donuts you will consume a large number of calories.

And can cause an excess when you eat beans as well.

But, you’ll generally feel far too full before you can eat enough beans that will cause weight gain.

Are beans good for belly fat? 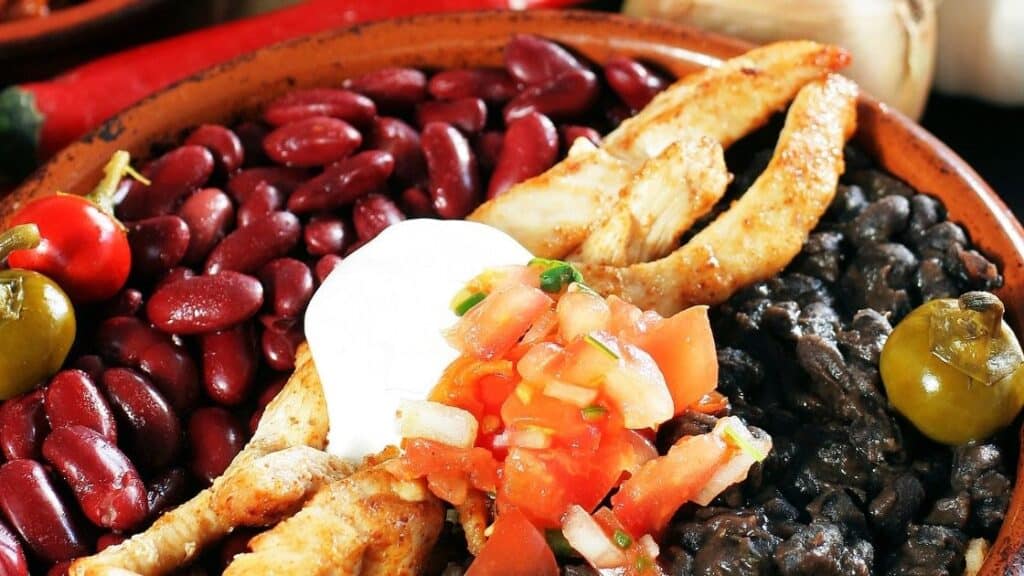 Beans are a vegetable and vegetables are generally good for losing weight.

But, I wanted to know for sure whether beans are good for belly fat, and how they compare to other vegetables and foods.

As a general rule, beans are good for belly fat.

Eating beans satisfy your hunger without causing you to consume too many calories.

For that reason, you can virtually eat as many beans as you like and not have an excess of calories.

Which will help your body to burn off excess belly fat.

Interestingly, certain foods are higher in calories than others.

And if you consume them you can eat these kinds of foods before you’ll feel full.

As a result, you’ll have an excess of calories and your body will store it as fat.

These kinds of foods are almost always high in sugar such as candy, ice cream, candy bars, and sodas.

However, if you can find versions of these which have lower calories such as the zero versions of various soda flavors.

Or, candy bars sweetened with honey you can still consume them and be within a healthy calorie range.

How many beans can you eat and still lose weight?

Beans on average contain around 100 calories per 100 g.

Which is the same as half a cup, and would give you 5% of your calorie needs for the day.

Most people can comfortably eat around 1 to 2 cups of beans on their own before they feel full.

Therefore, you’ll get around 10% to 20% of your daily calorie needs by eating a normal amount of beans.

When you consider you eat about 3 large meals per day and the fact that you’ll typically combine other foods with your meals, you’ll always fall within your daily calorie limit and therefore, your body will need to burn excess body fat for fuel.