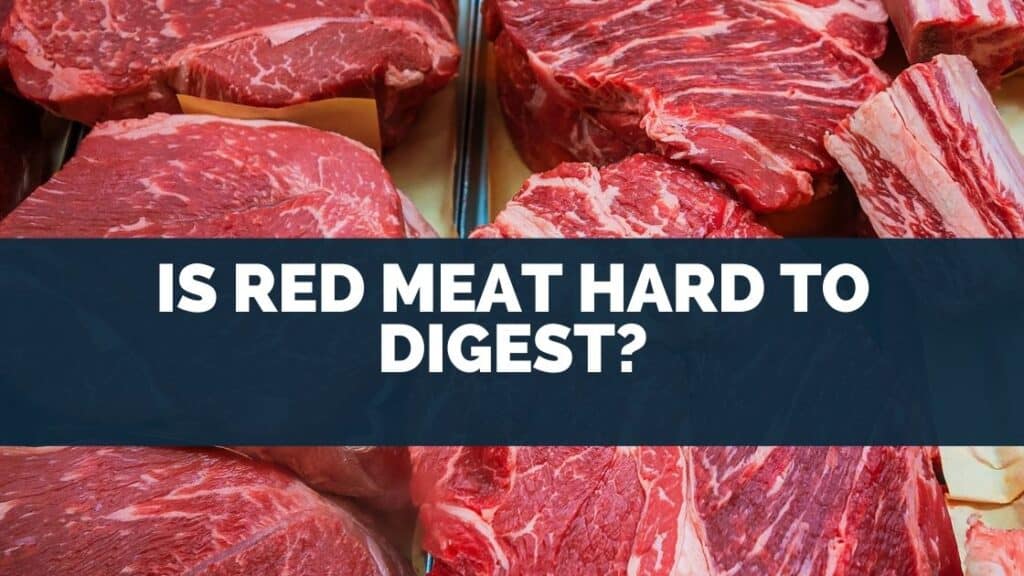 Red meat, while an excellent source of proteins, is not as easily digestible by our bodies as compared to other foods like fruits or vegetables, which can break down in less than a day.

But is red meat hard to digest?

Red meat can take up to 2 to 3 days to fully digest and pass out your digestive system because it contains fats, proteins, and sugars that are difficult for the body to break down immediately.

Strong acids and enzymes which aren’t readily available in the human body are required to break down these substances.

Scientifically speaking, the more calories consumed in the food, the more difficult it is for the body to break down into components that it can easily absorb.

The lesser the calorie content, the easier it is for the contents to break down.

Calorie content varies from meat to meat as there are many types; hence the time to digest the different kinds of meat also varies.

Containing high amounts of protein which helps build muscle and bone, red meat in moderate amounts is very good for the body.

It also contains vitamin B-12, which helps make DNA and keeps red blood cells healthy, zinc which keeps the immune system working in a proper way, and iron which the body requires to function in a healthy manner by making hemoglobin.

Doctors say to limit red meat to a maximum of twice a week due to the many problems overconsumption may cause, such as heart disease, colon cancer, and diabetes.

In place of red meat, nuts, fish, beans, or poultry can be consumed as a source of protein.

If overly consumed, red meat may cause long-lasting health problems such as type-2 diabetes, colon cancer, and other health issues.

Go to top
Table Of Contents hide
1 Can Red Meat Cause Digestive Issues?
2 How Long Does Red Meat Take To Digest?
3 Which Red Meat Is The Easiest To Digest?

Can Red Meat Cause Digestive Issues? 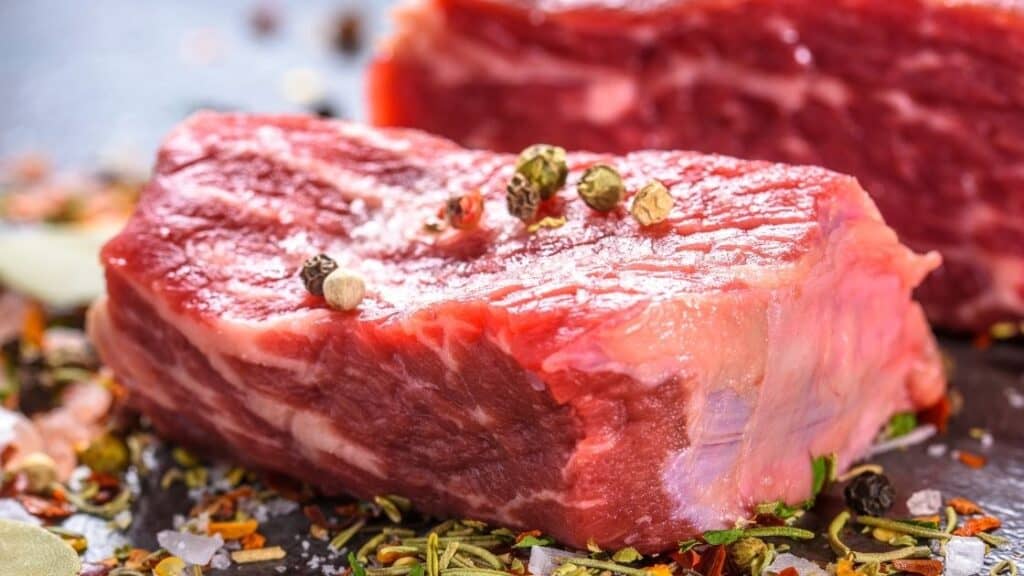 Yes, red meat is indeed hard to digest due to some specific substances it contains.

A particular one being “fat” requires very strong acids and enzymes to break down into components the human body can absorb.

The process of breaking down food into substances that can be transported and used by the body is called digestion.

One particular macronutrient called “fat” is found in somewhat high concentrations in red meat, of course, depending on the cut and type of meat.

In addition, a natural sugar called Neu5Gc, which is found in red meat, may damage our immune system as it is very hard to digest, which is a strong reason why red meat should not be consumed in high amounts.

One way of helping the body digest red meat faster is taking small bites of the meat and chewing it properly in order for the body to accept and digest it with ease.

Chewing the food thoroughly helps your body in secreting the gastric acids required to break down the meat.

However, just because red meat is harder to digest as compared to other foods, that doesn’t mean it shouldn’t be consumed.

Red meat is an excellent source of protein, vitamin B-12, and iron which play very useful and active roles in our body’s health and immune system.

How Long Does Red Meat Take To Digest? 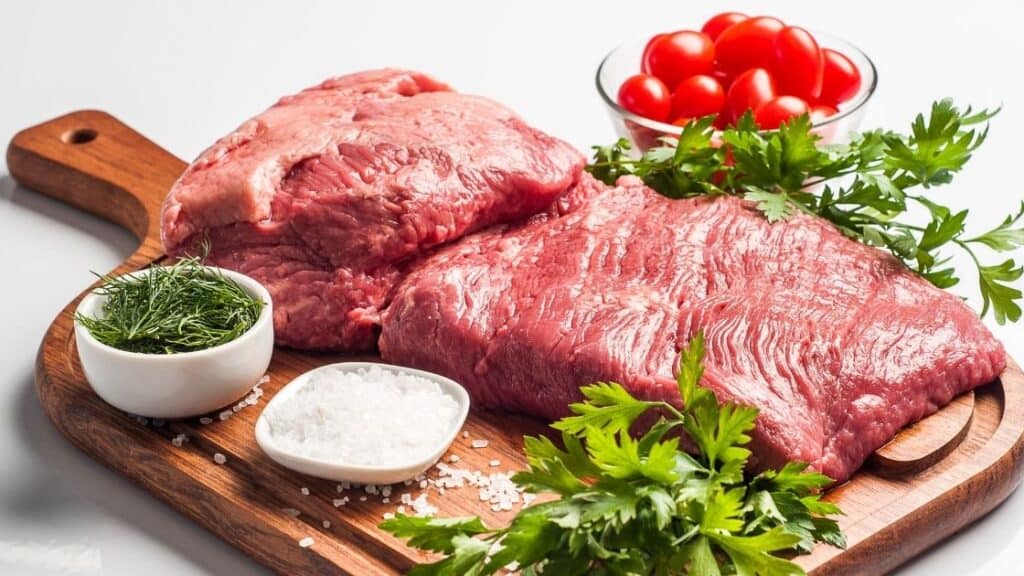 The proteins red meat contains are difficult to digest by the human body and can cause bloating or discomfort as the stomach doesn’t empty out as fast as it normally does with other foods.

Along with the fat percentage and sugar content, digestive issues may emerge after consuming red meat in larger quantities.

Once introduced into the digestive system, the body requires strong acids and enzymes to break down red meat.

As a result, the meat stays in the system for longer periods before it is passed out, which is another reason for digestive issues being caused.

Though red meat doesn’t have to be excluded from your diet, it should be consumed in measured amounts to avoid the risk of health damage which can cause severe health issues, especially in the long run.

The older you get, the weaker your immune system and digestive system get, so controlling your diet at a younger age will prove fruitful in older age.

A growing body of evidence suggests that consuming red meat can have a negative impact on health.

Studies have linked red meat consumption to an increased risk of heart disease, stroke, and certain types of cancer, such as colon cancer.

In addition, red meat is high in saturated fat and cholesterol, which can contribute to clogged arteries and other health problems.

A number of health benefits can be gained by avoiding red meat.

In addition, plant-based diets have been linked with a lower risk of heart disease, stroke, and some types of cancer.

Which Red Meat Is The Easiest To Digest? 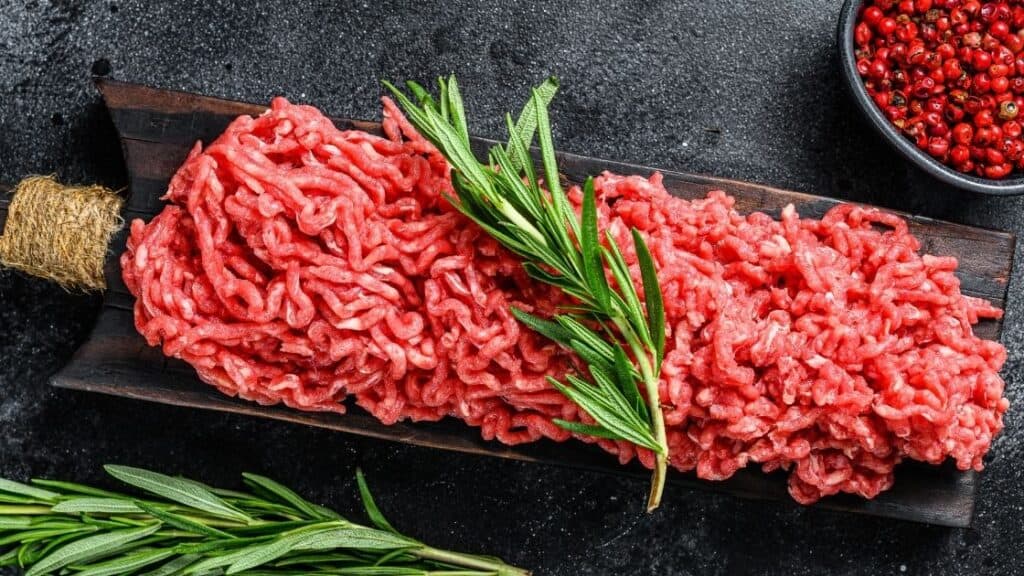 Ground meat and tender cuts of beef are the easiest to digest.

The more you chew the meat (at least 32 times), the easier it is for the body to break it down and pass it through your digestive system; hence, tender or minced meat is easier to digest.

Large amounts of beef or any kind of meat should be limited or avoided when being consumed as meat is difficult to digest and take several days for the acids and enzymes in your body to break it down.

Chicken, turkey, and other lean meats should be prioritized as the main source of protein and iron, especially if you have faced digestive issues in the past following the high consumption of red meat.

One of the healthiest types of red meat is “goat meat, ” which contains less fat than beef, making it much easier to digest.

It also has fewer calories than pork but a similar amount of protein which is another reason for it being one of the healthiest types of red meat.

Generally speaking, the lower the calorie of a certain food, the faster it gets digested by your system.

The same goes for consistency; the smoother and minced food gets moved through your system faster than foods in bigger cuts like a steak.

While all red meat is not created equal, there are some types that are healthier than others.

For example, bison and grass-fed beef are lower in fat and calories than traditional beef and contain more omega-3 fatty acids.

These health benefits are due to bison and grass-fed cattle being allowed to graze on open pasture, resulting in leaner, healthier meat.

In addition, wild game meat such as venison and elk are also excellent sources of lean protein.

So, if you’re looking for the healthiest kind of red meat, look for grass-fed, wild game options, or lower in fat and calories.

Your body will thank you for it!