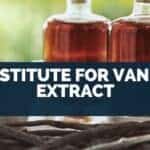 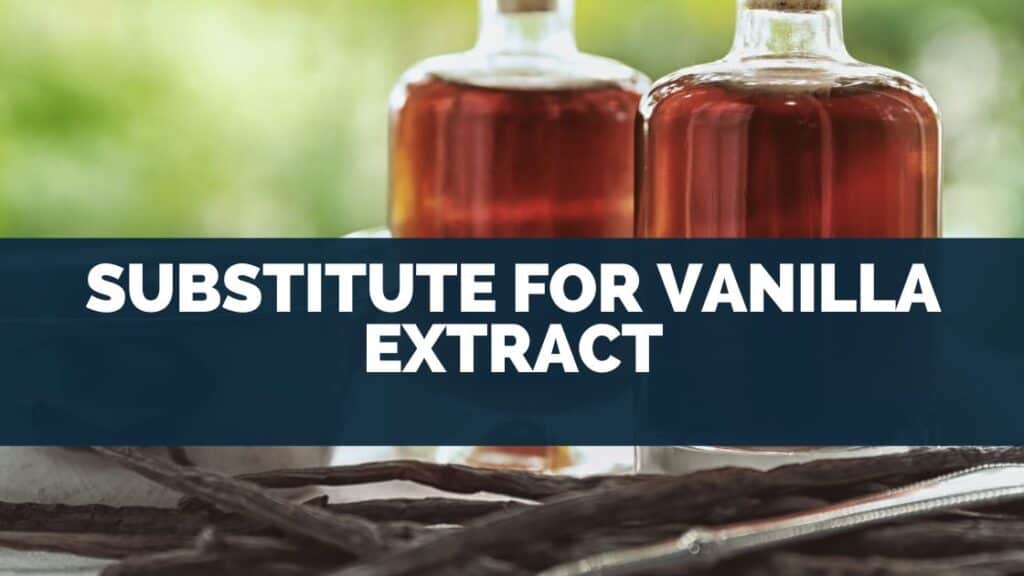 Baking is an excellent therapy that many find comfort in as a way to de-stress and relieve anxiety.

One thing that most baking recipes have in common is that they call for vanilla extract.

Vanilla extract has been a staple ingredient for baking as it helps enhance all the other flavors in the recipe.

If you have no access to vanilla extract or are unable to use it for some reason, don’t worry! From maple syrup and vanilla powder to almond extract and bourbon, here are some substitutes for vanilla extract you can use in your baking recipes.

The vanilla powder has a color that ranges from white to sandy beige and has a consistency similar to powdered sugar.

It is made from vanilla beans and has a more intense vanilla flavor than vanilla extract.

Additionally, aside from using it in baking recipes, it can also be used as a natural sweetener.

Some folks enjoy using vanilla powder in certain recipes as it doesn’t pale the color of the cake or turn the frosting brown as the extract can do.

Vanilla paste is a mixture of vanilla extract and vanilla powder mixed into a syrup-like paste.

Vanilla paste has a more intense flavor than vanilla extract; it is best used when you want to highlight the vanilla flavor in your recipe.

It is recommended to use a 1:1 ratio when using vanilla paste as a substitute.

Vanilla paste is best for:

Because of its nutty flavor, almond extract is considered more potent than vanilla extract, so it is recommended to use ½ the amount you would use for the vanilla extract.

Almond extract is best for:

Often used as a sweetener on pancakes and waffles, maple syrup is also an excellent choice for a vanilla extract substitute.

A sweet, rich flavor can also give moisture and binding properties to your baked food.

You can use the same amount of maple syrup as the amount of vanilla extract the recipe calls for.

It might sound a tad strange, but you can use liquor such as bourbon or rum as a substitute.

Vanilla extract is made by soaking vanilla beans in a mix of water and ethyl alcohol, and some liquors will make a pretty good substitute. 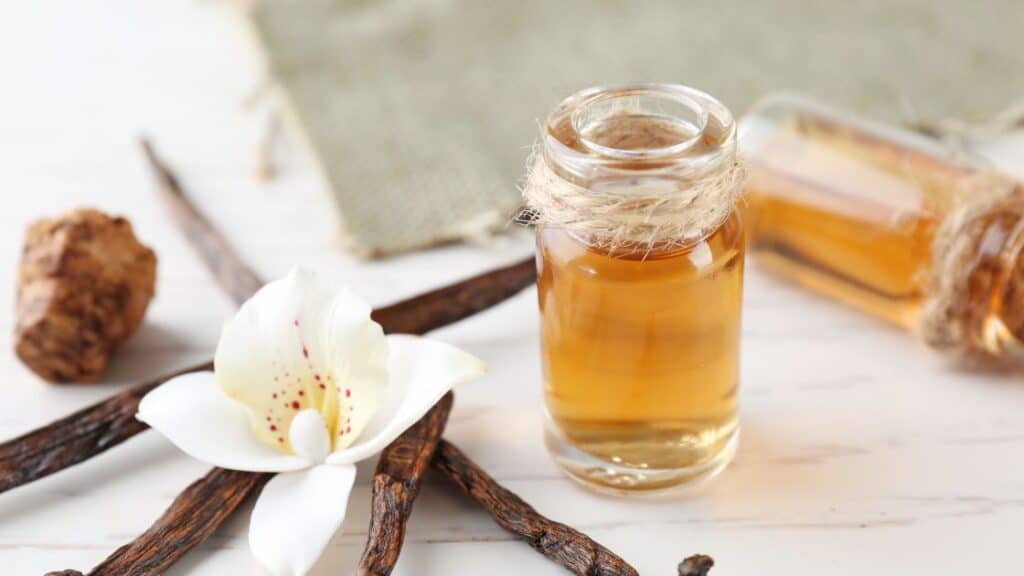 Whether you’ve run out of vanilla extract or you want to experiment with a new chocolate chip cookie recipe, there are a few substitutes you can try like vanilla essence, honey, or maple syrup.

Chocolate chip cookies have been a popular dessert or snack worldwide.

For someone familiar with baking, you’d know that vanilla extract is one of the key ingredients in making a delicious and flavorful chocolate chip cookie.

However, if trying something new is on the cards, here are some substitutes you can use for vanilla extract.

Vanilla essence, commonly known as artificial vanilla extract, is made from vanilla beans that have been soaked in alcohol.

Vanilla essence is produced synthetically and is made from artificial flavor and colors, and because of this, it is less expensive than pure vanilla extract.

Vanilla essence might be a better fit for baked foods that don’t require a strong vanilla punch, whereas actual vanilla extract is typically preferable for dishes that are raw or rely on vanilla as the predominant flavor.

Vanilla powder is more expensive than pure vanilla extract, but it has a more intense flavor, that’s why it can also be used as a sweetener.

It is usually made from dried and ground vanilla beans.

Vanilla bean paste is made by incorporating vanilla extract, vanilla bean seeds, and a thickening agent.

Compared to vanilla extract, vanilla bean paste has a thicker consistency than syrup or paste.

If you want to avoid vanilla products, you can also experiment with maple syrup, honey, and spices like cinnamon, nutmeg, ginger, and cloves. 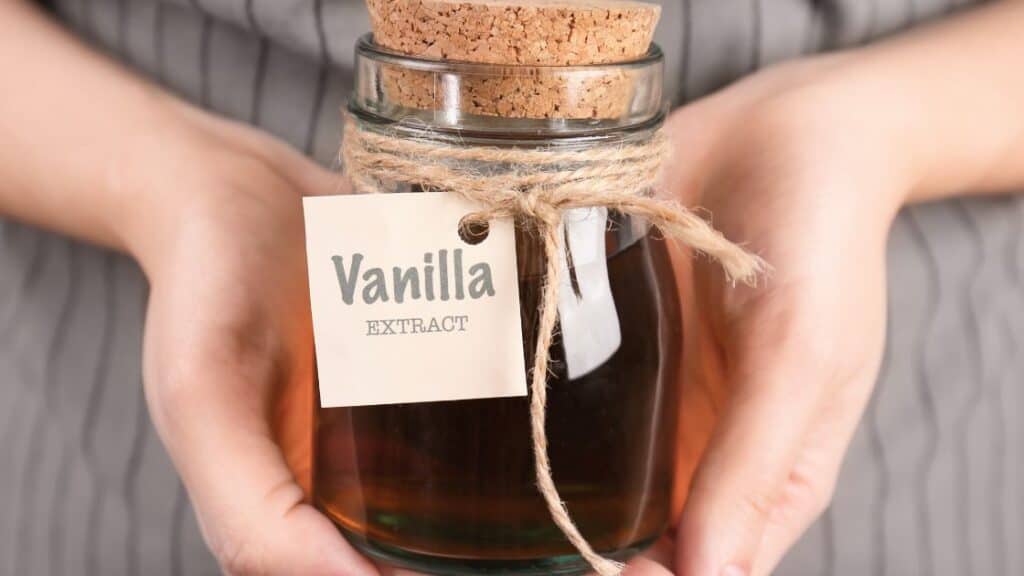 Like maple syrup, honey can be used as a vanilla extract substitute in all your baking recipes.

You can use the same amount of honey as a vanilla extract in your recipe in a 1:1 ratio.

Honey is a powerful humectant, which means it helps seal in moisture, keeping cookies, biscuits, and cakes moist for days.

Honey adds a flavor that is similar to vanilla’s, but it also adds a lot more sweetness, so you might want to consider lowering the recipe’s sugar amount depending on your taste.

Honey has been used as a natural remedy for centuries, and a good reason.

This delicious sweetener contains several antioxidants, enzymes, and other nutrients that offer many health benefits.

For example, honey has been shown to help with digestive problems, boost immunity, and fight inflammation.

Additionally, honey can be used topically to speed up healing time for minor wounds and burns.

So the next time you’re doing some baking, think about using honey in the place of vanilla extract! 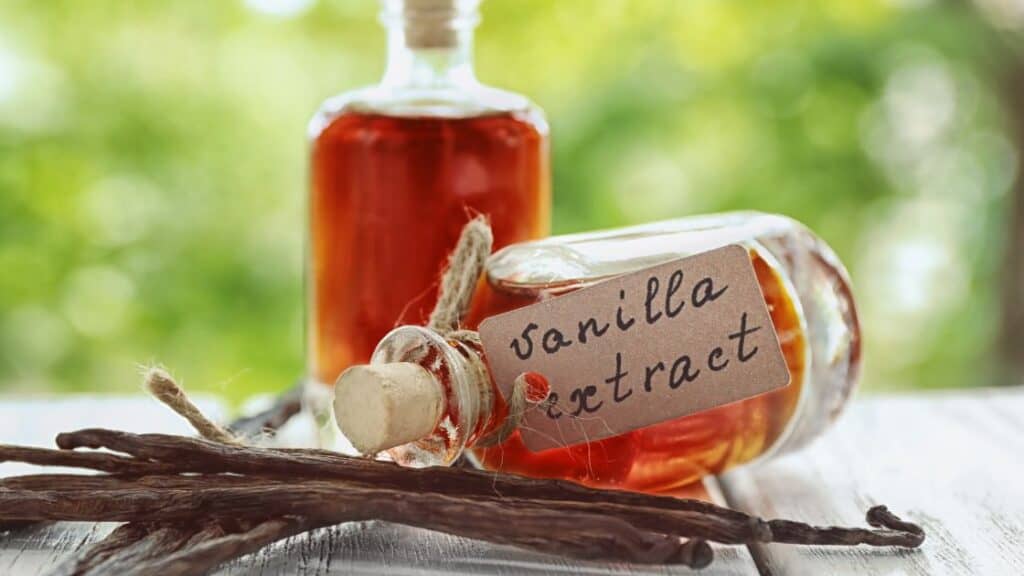 Most baking recipes list vanilla extract as a key ingredient.

However, if for some reason you don’t want to use vanilla extract, there are plenty of substitutes that can similarly enhance the taste.

One easy substitution is to use an equal amount of almond extract in place of vanilla.

If you don’t have any almond extract on hand, you can also try using maple syrup or honey.

Just add a little less than the recipe calls for, as these sweeteners are already quite concentrated.

With a little creativity, you can still bake up a batch of delicious cookies – even without vanilla extract.

Baking is one of the most beloved pastimes for people all over the globe.

The scents of cookies and cakes wafting through the house evocate childhood memories and happiness.

While vanilla extract is a common ingredient in many baked goods, there are actually several reasons to bake without it.

First, vanilla extract can be quite expensive.

If you’re on a budget, you can achieve similar results by using vanilla bean paste or vanilla powder, both of which are cheaper alternatives. Second, vanilla extract can be quite potent, so a little goes a long way.

Too much vanilla extract can make your baked goods taste bitter.

Finally, baking without vanilla extract is a great way to do it if you’re looking to experiment with other flavors.

By leaving out the vanilla, you can let other flavors shine through.