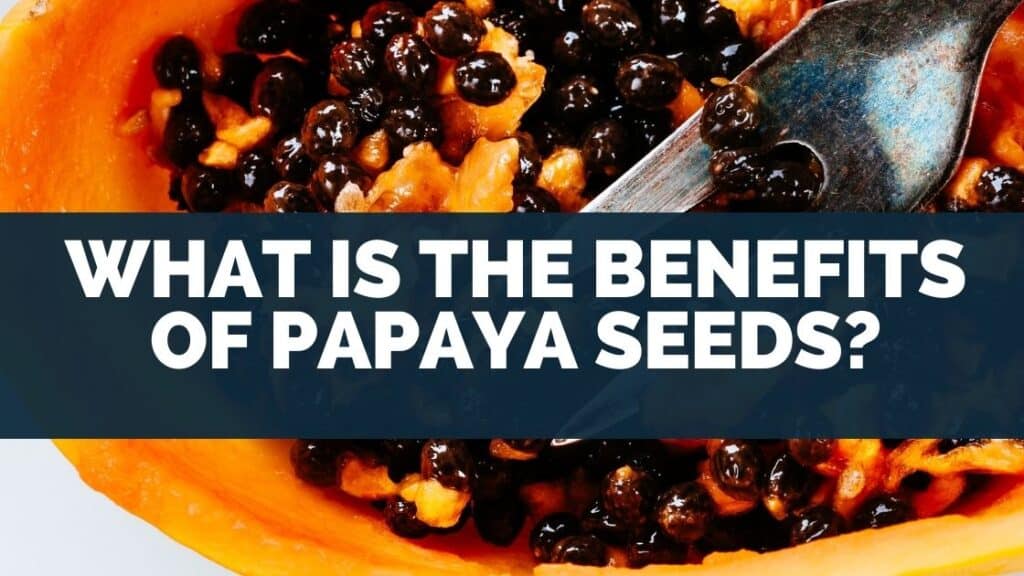 I generally discard papaya seeds when I eat papaya because they have a bitter taste, but I’ve recently learned that they can be eaten.

So, I was curious how healthy papaya seeds are, and what the benefits are to eating papaya seeds.

Papaya seeds have been shown in a study to remove parasites in the digestive system.

Papaya seeds can be added to foods in small amounts for nutritional benefits without affecting the flavor of the food.

They are also very versatile and can be used as a spice in a similar way to black pepper.

I’ve been researching other different kinds of seeds, and some of them need to be cooked before you eat them.

So, below I will explain whether you can eat papaya seeds raw.

As well as, whether there are any known side effects to eating papaya seeds.

Can You Eat Papaya Seeds Raw?

As you may know, seeds of various plants are delicious, and healthy to eat but only if they are cooked first, otherwise they are toxic.

So, I was curious whether papaya seeds can be eaten raw.

Papaya seeds are quite large and are difficult to swallow whole, so it’s recommended to grind them first before adding them to food.

Papaya seeds can also be cooked prior to eating.

Where on their own they can cause a spicy sensation on your mouth.

But, when added in small amounts to other foods can really improve the flavor.

How to eat papaya seeds (raw and cooked)

Pestle and mortar or a blender can work well to crush/shred the seeds into a powder.

The ground papaya seeds can be added to foods and give them an extra spice.

To prepare them you should rinse them under cold water in a sieve to remove any remaining stringy bits, and papaya flesh.

They have a range of uses such as in smoothies, hot sauce, curries, and other foods that you want to give a spicy hit.

But, you can add them in small amounts so that it doesn’t change the flavor.

That way you get the nutritional benefits of papaya seeds.

The flavor of papaya seeds doesn’t go well with sweet smoothies made from bananas, and other sweet fruits like papaya, and cantaloupe.

But, in vegetable smoothies they can go quite well, together with other spices you might add such as ginger and cinnamon.

Papaya seeds can last a long time if kept dry and cool so that they don’t germinate.

But, once you crush them they can tend to stay fresh for about a week in the fridge.

Papaya seeds can be laid onto a baking tray and baked in the oven.

This will dry them out, and once you grind them, they will last a bit longer.

Here’s a really good video that shows a bunch of recipes that you can add papaya seeds to:

Do you chew or swallow papaya seeds?

Papaya seeds have a hard shell, and if you swallow them whole they won’t be broken down by your body and will exit your body undigested.

This limits the nutrients that you get from them.

Therefore, it’s best to grind them before adding them to other foods.

But, it’s perfectly fine to chew them from a health perspective.

The main issue is that they don’t have a good taste when eaten alone and have a bitter, spicy flavor that is very unappealing.

Papaya seeds are generally neutral in regards to their effect on weight loss.

They neither cause you to put on weight or help you to lose weight.

Papaya seeds are consumed in small amounts that don’t have a measurable impact on your overall calorie consumption.

And they aren’t known to have any special properties that help in weight loss.

However, they do contain beneficial nutrients that help your body’s natural processes which can cause your body to be more efficient in burning fat.

What Are the Side Effects of Eating Papaya Seeds? 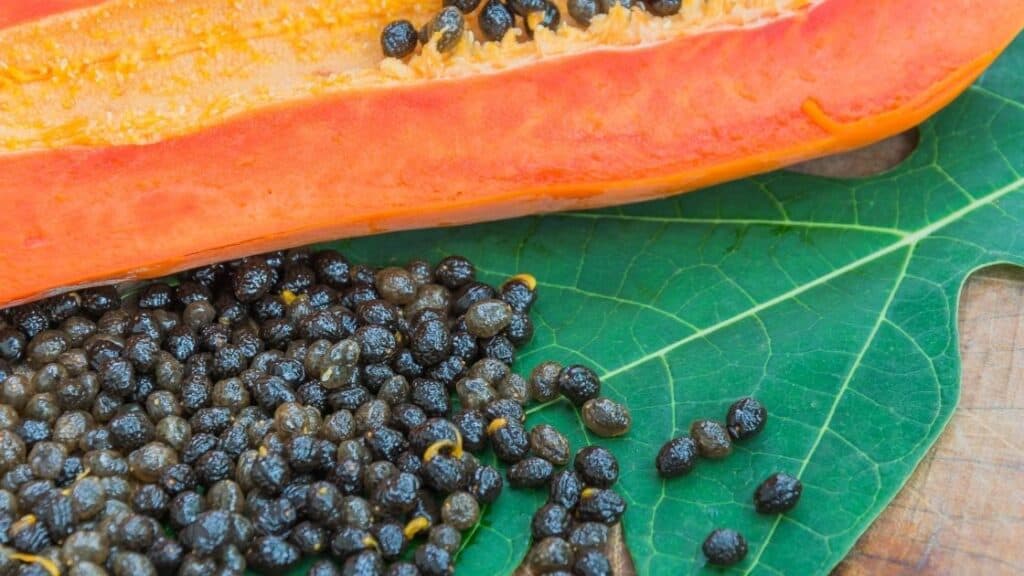 I eat certain foods in small amounts as they are known to cause discomfort or be toxic in large amounts.

But, is it OK to eat papaya seeds, and can you eat too much. Here’s what I found.

There are no known side effects of eating papaya seeds according to medical professionals.

Used as a spice, around 1 tablespoon of ground papaya seeds is typically used.

However, it’s recommended to limit eating papaya seeds to a few servings a day.

There have been a few studies that have looked at the effects of large doses of papaya seeds on various animals.

These showed that they can cause health issues, such as a decreasing fertility rate.

But, so far no studies on humans have been completed.

Therefore, at this stage eating papaya seeds is perfectly fine, provided you don’t consume them in large quantities, such as going on a papaya seed fast, or doing a papaya seed cleanse

(in this article I answer a common question o get asked;  can we eat chia seeds in fast).

Do Papaya Seeds Help With Parasites? 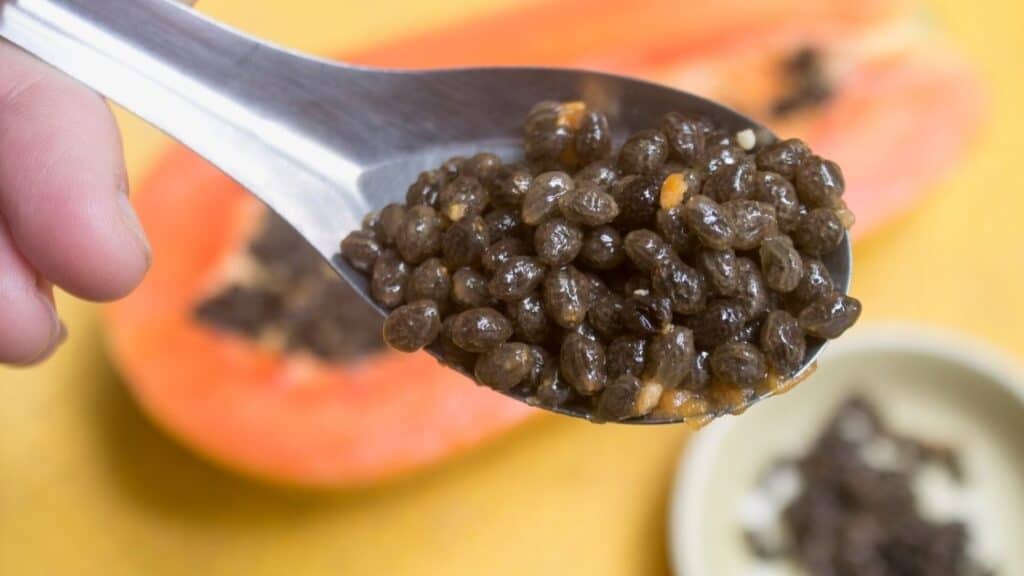 It’s generally understood that papaya seeds are good at removing parasites from the digestive system.

But, I wanted to know if there are any experiments that have been done to show whether they help with parasites.

Papaya seeds are very effective at removing parasites from the digestive system.

One study showed that papaya seeds can remove 70% to 100% of intestinal parasites.

In the study, they gave 60 people with intestinal parasites 20g (about 1 tablespoon) of a papaya seed and honey mixture.

The papaya seeds that were used were first air-dried.

They also compared the papaya seed and honey mixture to a placebo that contained only honey and found the placebo mixture only removed 0% to 15% of intestinal parasites.

They concluded that they are an effective remedy, and said that further studies should compare the effect of papaya seeds to conventional parasite treatments.

Since in tropical communities papayas are easily grown.

Foods that have been traditionally used to remove intestinal parasites are:

Common remedies involved making a small amount of raw ginger, turmeric, and garlic and eating it on an empty stomach.

It’s thought that on an empty stomach the parasites in your stomach are hungry and weak.

So, when you blast them with a strong spice it severely damages them or kills them.

A shot of apple cider vinegar first thing in the morning on an empty stomach can also give them a good whack.

Carrot, beetroot, and pumpkin seeds are very rough and sharp once chewed, and scour them from the walls of your intestines, which can make them detach.

An enema is also an effective treatment for dislodging parasites in your digestive system.

This video shows what one guy experienced when he did a few fast to remove parasites.

I’ve also seen a few videos where people have observed dead parasitic worms in their stool after completing a fast.

They also reported that during the fast as you, and the parasites are starving, they release more than normal amounts of toxins into your body, which can make you feel terrible.

In addition to papaya seeds’ ability to remove parasites, a doctor named Dr. Lam has stated that papaya seeds additional help to:

Therefore, it’s a good idea to include them as part of a healthy diet.

Do Worms Live in Papaya Seeds? 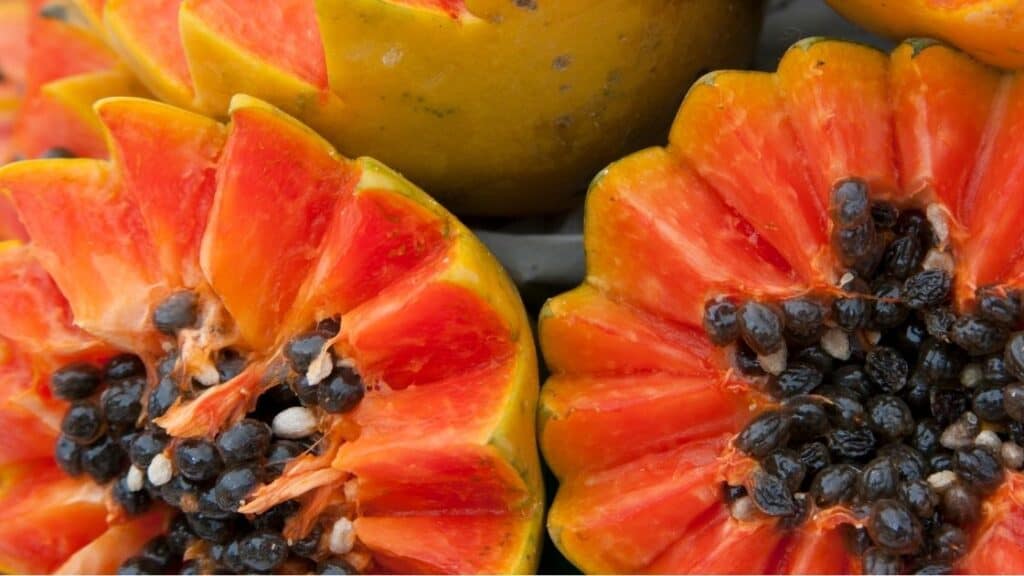 I’ve noticed that a bunch of fruit I grow can get worms that eat the flesh.

And I wanted to know if worms live in papaya seeds.

Worms can live in papaya seeds.

However, there is no evidence to suggest they do.

Using papaya seeds for parasites or cooking can be done by first cooking the papaya seeds and then grinding them.

This will kill any worms present in the papaya seeds.

Certain worms that infest other fruits like apples are known to eat the seeds but not live inside them.

Worms and maggots that can be present in papaya generally only eat the skin and fruit.

It’s common for wasps to lay eggs in the papaya.

One really good remedy is to put a stocking over the papaya while it’s ripening.

Simply take a normal pair of stockings and cut them using a pair of scissors to create a sleeve.

Then slide the sleeve over the papaya.

The stockings will create a tight seal over the papaya and make it very difficult for wasps and flies to lay eggs on or into them.