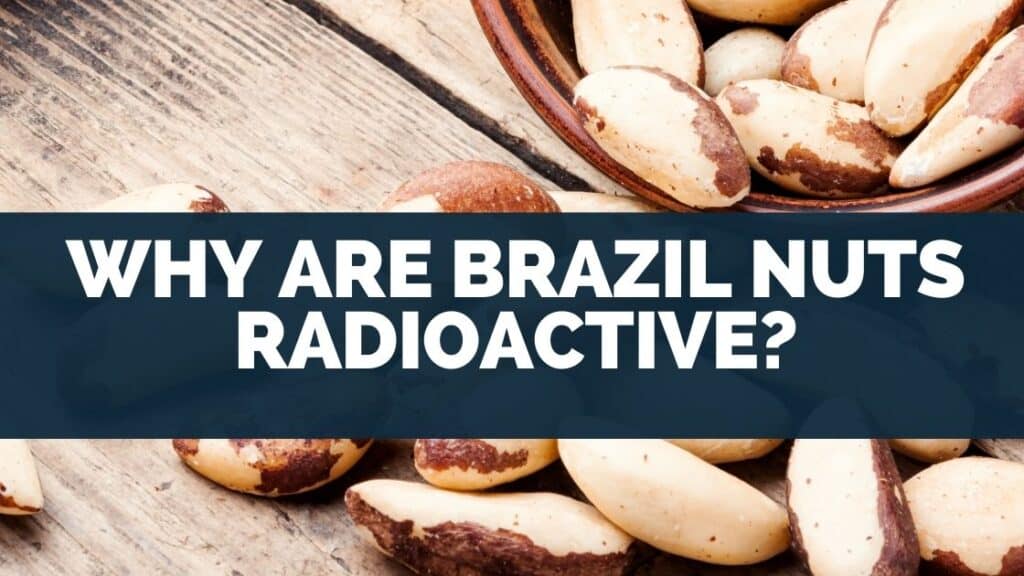 Brazil nuts are one of the most common seeds hailing from the Amazon rainforests and are delicious and rich in nutrients, such as vitamin E, Magnesium, and selenium.

They might also be a great source of radioactive materials, but are Brazil nuts really radioactive?

Brazil nuts are among the most radioactive edible nuts, as they contain high levels of radioactive elements such as radium and potassium.

The tree’s extensive root system absorbs radium instead of barium, which is essential for its growth.

But these radioactivity levels aren’t dangerous for humans.

The article will discuss other facts related to Brazil nuts, including how they grow, if you can be allergic to them, and how to roast them.

Read on to learn about the radioactive content found in Brazil nuts. 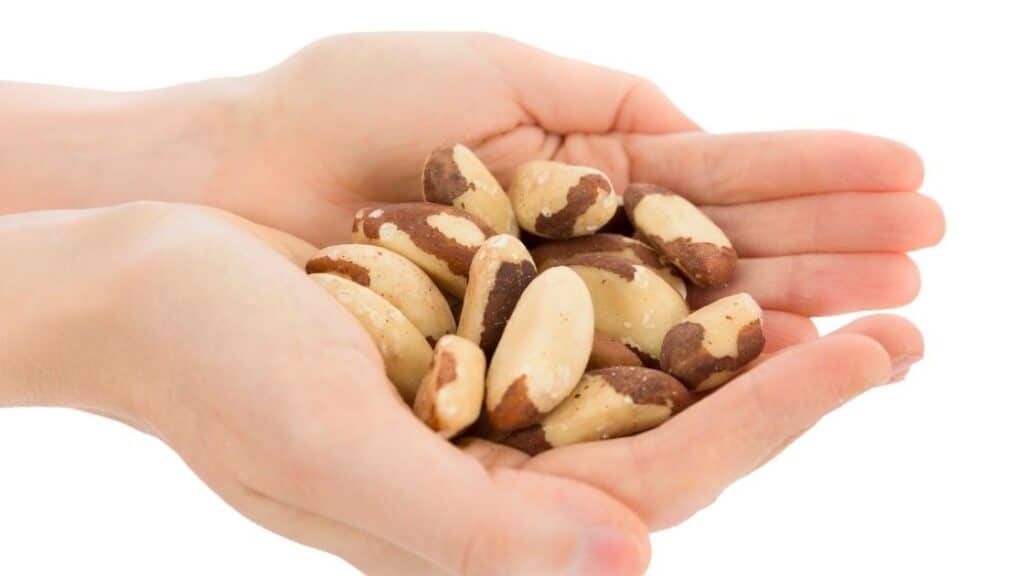 Brazil nuts are the fruit of a South American tree primarily found in the Amazon rainforests.

Brazil nuts are fruits with the most radioactive content because they absorb radium, a very radioactive element, from the soil.

Trees need an earth metal called barium to grow and sustain, but if they don’t find barium in the soil, they “mistakenly” absorb radium instead of barium.

The absorbed radium accumulates in all parts of the tree, including its bark, leaves, trunk, roots, and the nuts it grows.

According to studies, Brazil nuts contain radium amounts 1000 times higher than other foods.

IAEA has also confirmed considerable amounts of radium in these plants.

Brazil nuts contain an average of 1 to 2 picocuries (a unit of radioactivity) per gram (pCi/g), while some studies found even larger amounts, reaching up to 6.6 pCi/g. These nuts also contain potassium, naturally occurring in tandem with 40K (potassium-40), also a radioactive isotope. 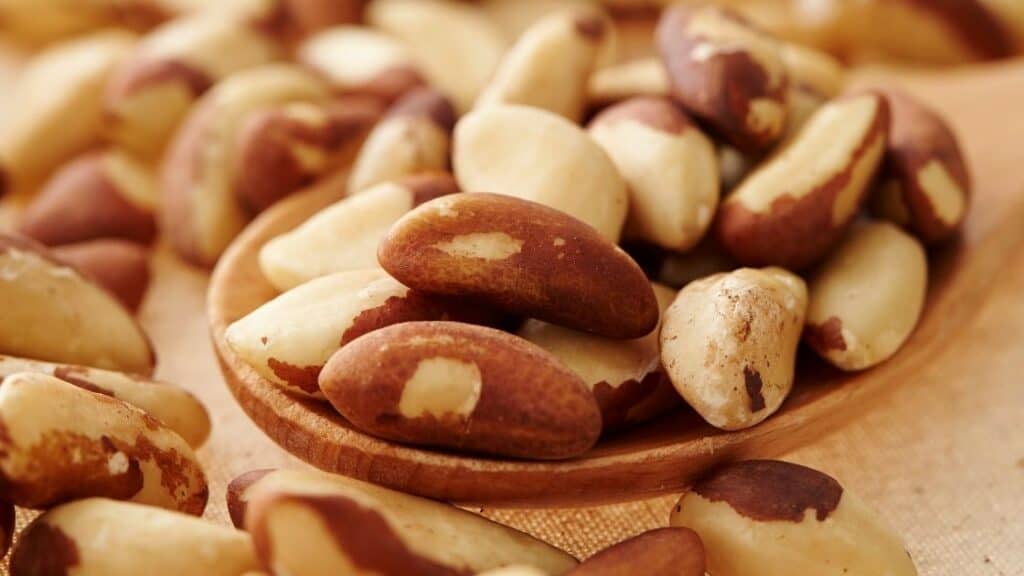 The brazil nut’s radioactive content isn’t dangerous for humans, as the number of radioactive isotopes don’t have any known health risks.

Plus, the amount of radium absorbed by the Brazil nut tree mainly concentrates in the bark and the leaves, rather than fruits.

According to the IAEA, humans have been living with natural radiation since the beginning of the universe.

There’s natural radiation in the sky, earth, air, oceans, and even the building material used in houses.

Daily exposure to radioactivity depends on where you live.

For example, if you live in higher altitudes, you’re exposed to higher radiation levels.

Many other foods contain radioactive elements or isotopes.

Bananas are rich in potassium, a famous radioactive element, but because potassium is one of the necessary minerals you need, there’s no need to worry about it.

Studies have found no ill effects in the radioactivity exposure caused by everyday objects. So, don’t ever worry about the handful of Brazil nuts on your table.

How to Grow Brazil Nuts? 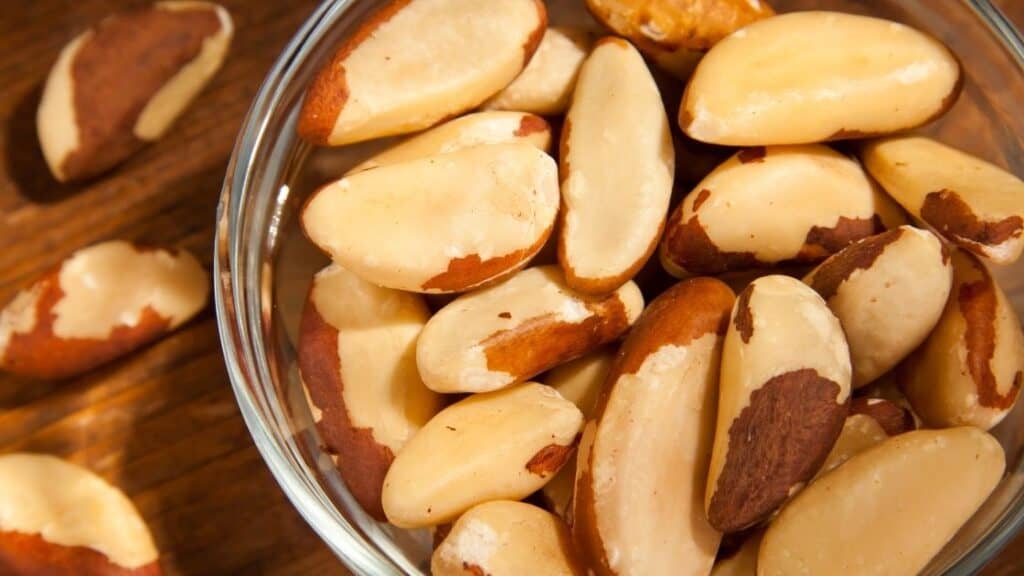 Half of their height is without branches, and the crown consists of large and long branches that go well above other surrounding trees, and they’re one of the largest trees in the rainforest, living up to 500 years.

However, due to their specific pollination process and requirements, it’s nearly impossible to cultivate them.

The bees that cross-pollinate flowers are native to Amazon rainforests and difficult to domesticate.

Another creature that spreads and germinates new Brazil nuts trees are rodents that eat these nuts.

When they gnaw open a capsule, they eat some of the seeds and bury others later, which later grow into trees.

So, most of the Brazil nuts sold globally are naturally raised ones that local collectors harvest in the wild.

The harvest time is during the rainy season that starts from January and lasts up to six months.

When the capsules fall off the trees, collectors immediately gather them.

here’s no other way to harvest the seeds because they fall off the tree when they’re ready to harvest. 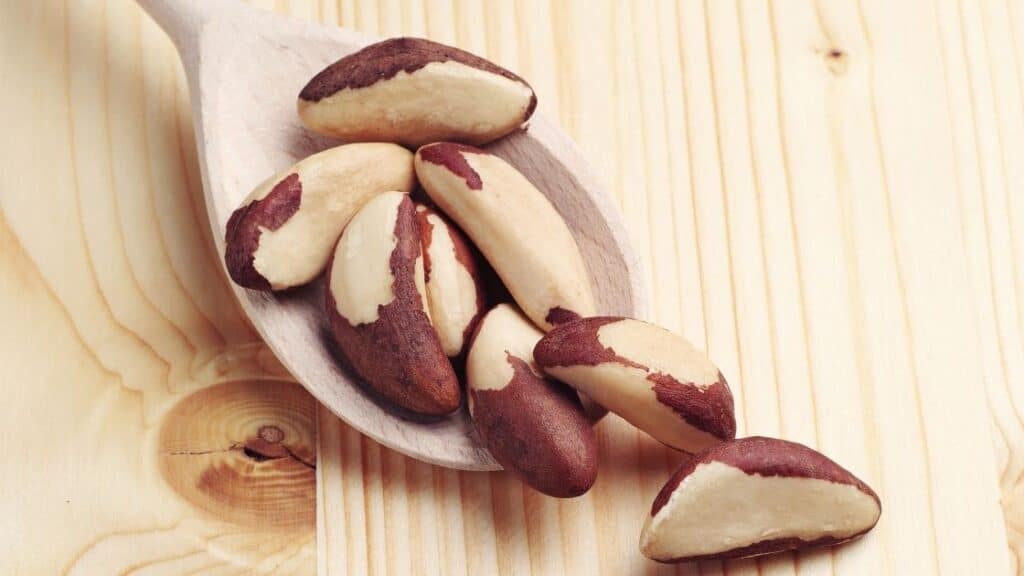 Although most Brazil nuts come from wild trees, some plantations in some parts of the Amazon grow them.

Farmers grow rootstock from seeds germinated by putting them in wet sand, and after 20 days, they put the seedlings in plastic cups or bags, then transplant them in the field.

After 1.5 to 2 years, they take good shots from high-yielding trees and graft them into the young trees.

It takes six years for the tree to bear fruit.

However, according to economic data, these methods of growing Brazil nuts aren’t profitable because of low production volumes.

Can You Roast Brazil Nuts? 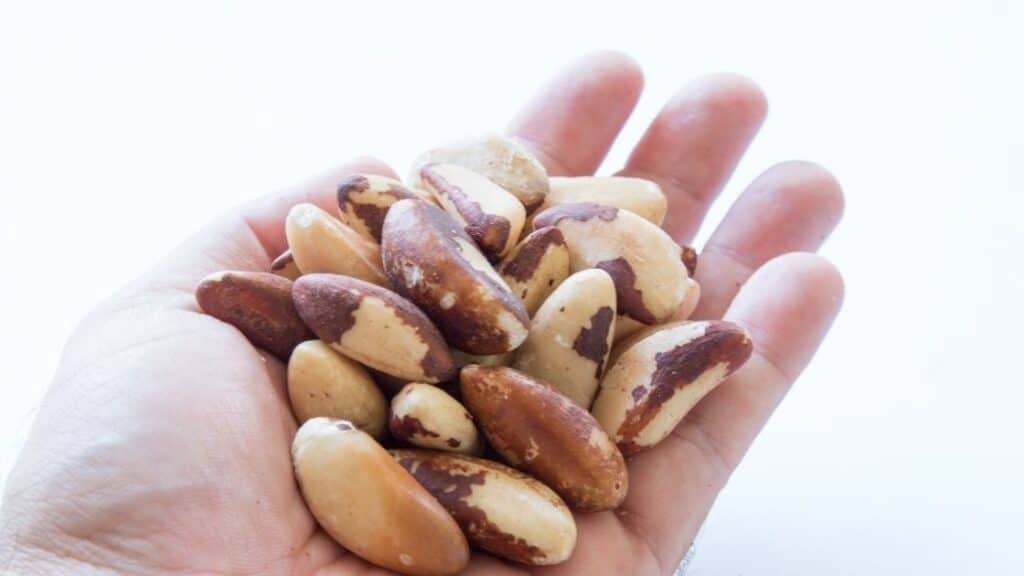 You can roast Brazil nuts to improve their flavor if you don’t like them, as the raw seeds have a somewhat bland taste.

This process can be done on a stove, in an oven, or microwave oven.

You can also add your favorite seasoning while roasting them.

To roast Brazil nuts in the oven:

When roasting Brazil nuts on the stove, make sure to stir them constantly and don’t walk away from the stove.

Because you’re dealing with direct heat, the nuts will roast faster than in the oven.

After you smell the roast, remove them and use butter, oil, or other seasonings to add flavor.

If you use the microwave, don’t roast them for more than one minute.

However, the time depends on the number of nuts and the type of microwave oven. 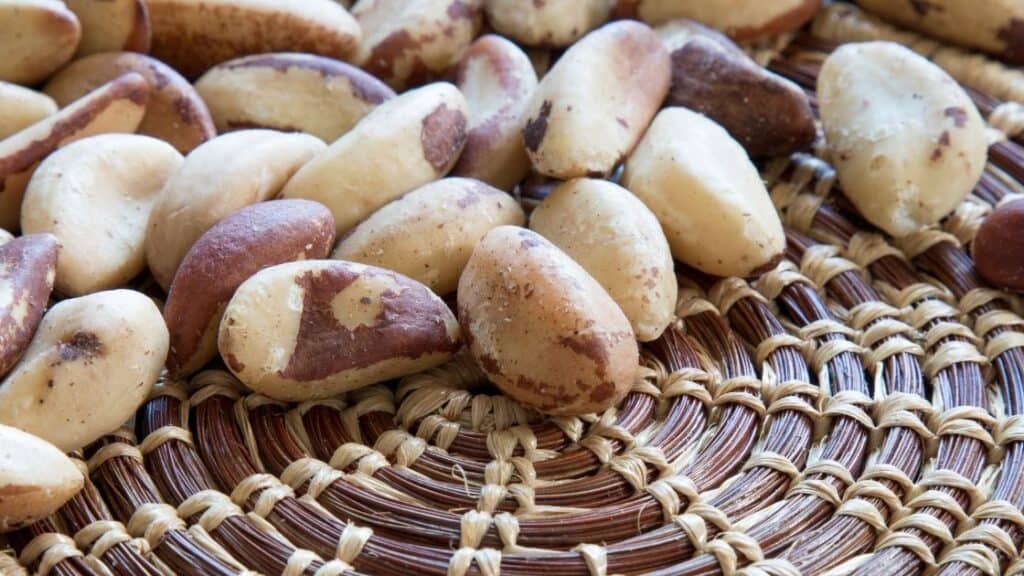 Selenium is a vital nutrient that can lead to many different issues if you don’t get enough. Studies have shown that cancer, thyroid disease, cognitive decline, and cardiovascular disease are among the common problems caused by selenium deficiency.

Roasting Brazil nuts may destroy the selenium content as, according to WebMD, it’s a mineral that might be affected by heat and roasting.

However, since Brazil nuts have high selenium levels, they can retain some of their selenium content after roasting, provided you use low temperatures.

Roasting and applying heat to any nuts can affect their nutrients and minerals positively or negatively.

For example, this study found that roasting can increase antioxidant properties in different nuts.

Brazil nuts are famous for being rich in selenium, and while the selenium content in a Brazil Nut depends on the region it comes from, an average nut contains 60-90 mcg.

According to studies, one or two Brazil nuts a day can help you hit your daily selenium requirements.

Although beneficial, if you eat lots of them, you can easily go over your required daily intake and experience selenium poisoning, which can cause problems including diarrhea, hair loss, brittle nails, discolored teeth, among others.

So, roasting Brazil Nuts isn’t disadvantageous, but it can also prevent its over-consumption.

Can You Be Allergic to Just Brazil Nuts? 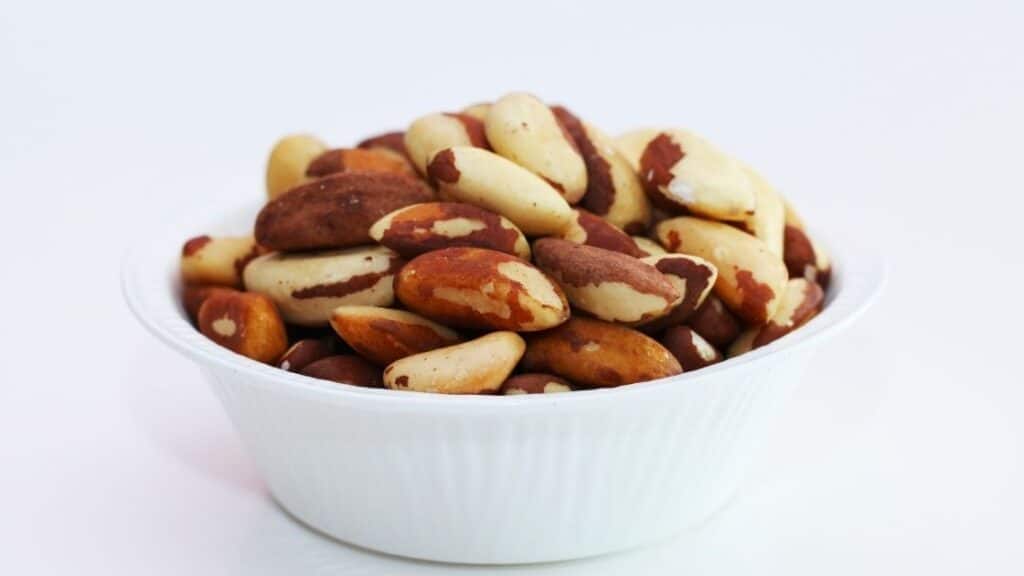 Brazil nuts, like many other tree nuts, can cause allergies, which is because they contain some specific proteins that act as allergens.

In fact, in some countries like the UK, Brazil nuts are the second most allergic nut after peanuts.

The symptoms can be severe and cause life-threatening conditions such as anaphylaxis, which is an allergic reaction that can be very dangerous because it affects breathing and can send the patient’s body into shock.

Other symptoms include diarrhea, nausea, a stuffed or runny nose, difficulty breathing and swallowing, vomiting, abdominal pains, and itching in the mouth, nose, eyes, or skin.

If you’re allergic to Brazil nuts, you’ll show allergic reactions to other products made by these nuts, such as oil or butter.

Avoid eating anything related to Brazil nuts and seek emergency care if you accidentally consume one of these products.

The high levels of radium and potassium in Brazil nuts make them one of the most radioactive foods in your pantry.

The tree has explorative roots that spread wide in amazon rainforests and absorb radium instead of barium.

However, you don’t need to worry about this radioactive content, as studies have shown they don’t harm the human body.

Plus, we’re exposed to lots of natural radioactivity from other sources, too.

The nut’s high selenium content can be more dangerous since it goes well above the recommended daily intake, so, don’t eat lots of Brazil nuts in a day.