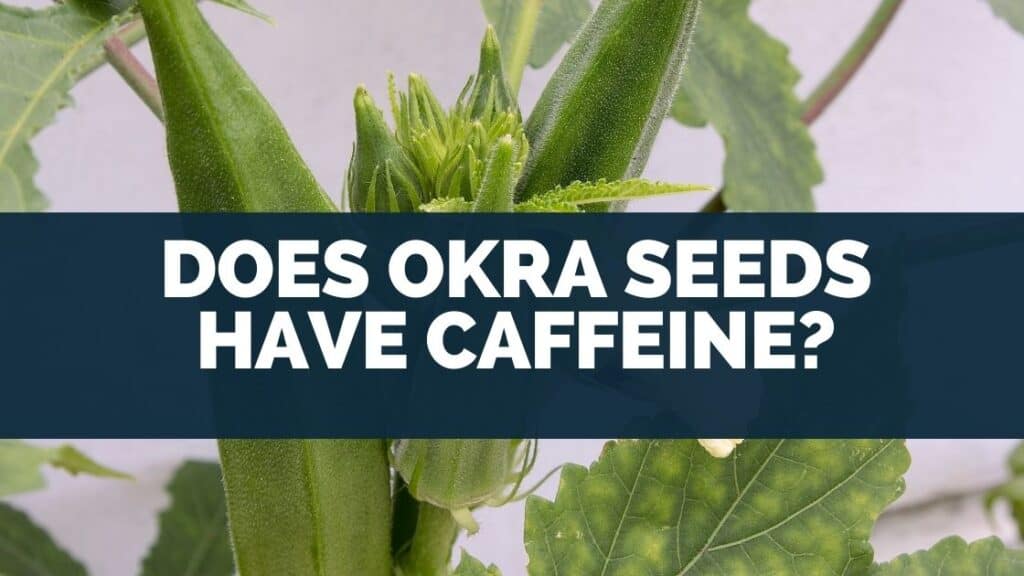 I was recently looking into using okra, and discovered that some people use okra seeds to make coffee. So, I was curious whether okra has caffeine in it.

I looked into the nutritional information about okra seeds and here’s what I found.

Okra seeds do not contain caffeine.

Okra in general is high in many beneficial nutrients such as vitamin C.

Therefore, consuming coffee made from okra seeds offers some benefits over drinking coffee.

Today, I will explain whether you can make coffee out of okra, how it’s made, what the unique benefits of okra coffee are, and whether okra seeds are good for you.

Go to top
Table Of Contents show
1 Can You Make Coffee Out of Okra?
1.1 How to make okra coffee
1.2 Overripe okra seeds
1.3 Origins of coffee made from Okra seeds
2 Okra Coffee Benefits
3 Okra Benefits for Stomach
4 Are Okra Seeds Good for You?
5 Is Okra Good For Your Skin?
6 What Is Okra Seed Used For?
7 Are You Supposed To Eat the Seeds in Okra?

Can You Make Coffee Out of Okra? 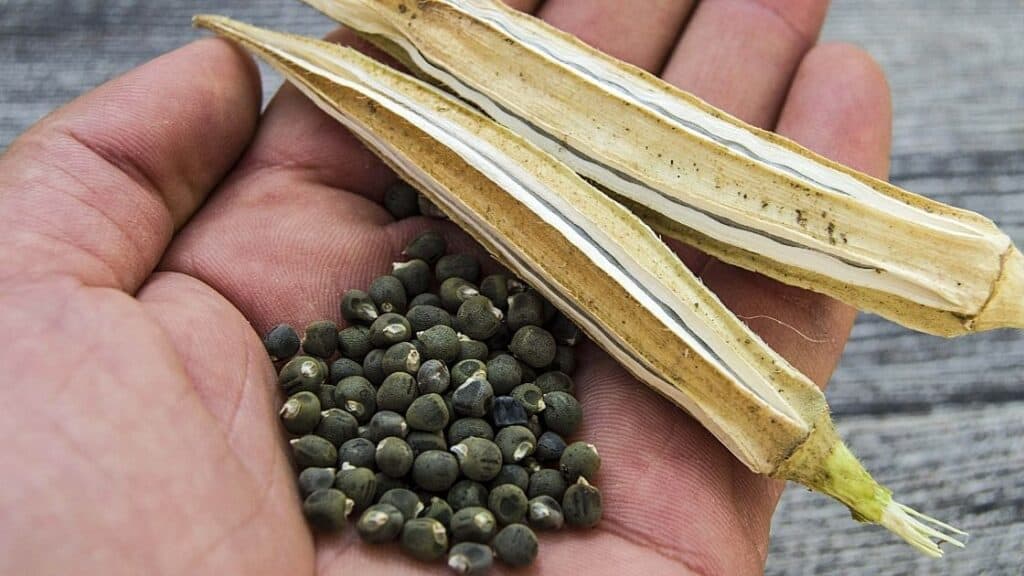 I really enjoy drinking coffee, because of the taste and how it improves my focus.

But, I’m always keen to try new hot drinks and wanted to know whether it’s possible to make coffee out of okra.

Okra seeds can be used to make a coffee substitute.

However, because they don’t contain caffeine they don’t offer the same benefits of coffee such as improved focus.

Generally, coffee beans are a preferred way to make coffee because of their caffeine content.

How to make okra coffee

Okra seed coffee is fairly easy to prepare and simply involves frying or roasted the okra seeds until they are golden brown and then pulverizing them in a pestle and mortar, or putting them in the blender.

Then you can simply use the ground okra seeds as you would ground coffee.

For example, you can add 1 to 3 tablespoons to a coffee plunger.

Okra seeds can be eaten raw and taste very nice with salads.

But, when using them it’s best to test the seeds to make sure they will taste good.

You can do that by squeezing a seed in between your fingers.

If it squishes between your fingers then it’s not good to eat and will taste bad.

Origins of coffee made from Okra seeds

Interestingly, okra seeds were used to make coffee during the Civil War era in the USA during the 1860s.

Okra is also an African word according to Arizona University, and Okra originated around the Nile river in Africa.

It was later brought to other regions outside of Arabia.

During the Civil War in the USA, the supply of coffee was limited. And it has been recorded that people used okra as a substitute for coffee. 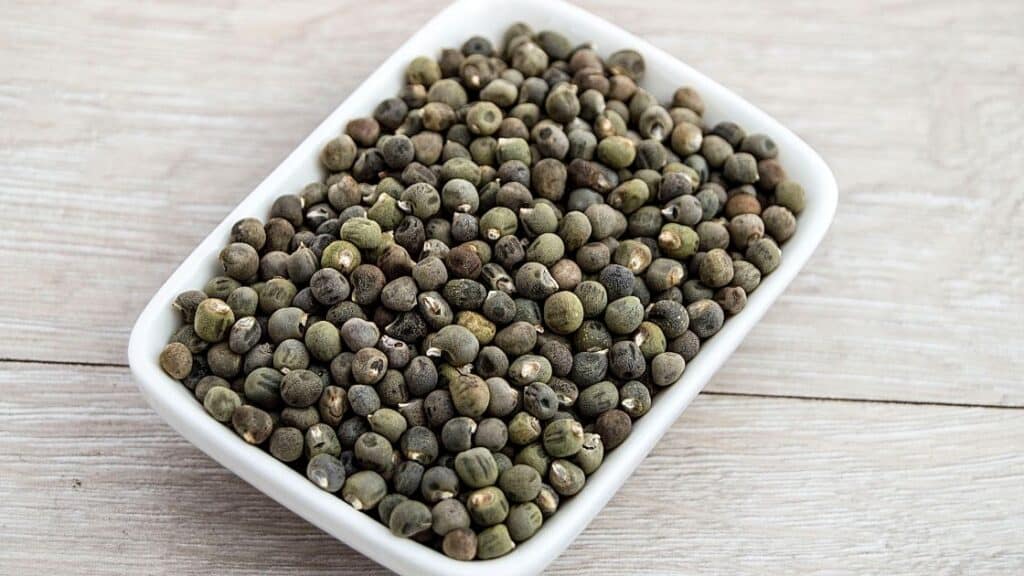 So okra coffee can be made, but are there any advantages to drinking compared to coffee and other drinks?

Based on the nutrients found in okra coffee here are the benefits of okra coffee.

Generally, okra coffee is high in vitamin C, vitamin b-6, and potassium.

Coffee by comparison doesn’t have any of these nutrients and largely is lacking in beneficial nutrients.

Okra coffee also doesn’t have caffeine which can be good for people who can’t consume caffeine.

As you may know, a balanced diet should take into consideration the nutrients found in foods. Citrus fruits for example are high in vitamin C.

Okra coffee has around 10% of your daily vitamin C needs per 100g.

This is the same as about 3 cups of coffee.

An orange by comparison has 88% of your daily vitamin C needs.

So, if you consume an orange or 2 per day then the fact that okra contains vitamin C isn’t really a determining factor.

Based on this fact, provided you eat a balanced diet, drinking okra coffee won’t have an effect on your overall nutrient intake.

And it’s up to you whether you prefer to drink okra coffee or normal coffee.

It’s generally hard to find okra coffee in stores, therefore, you would need to make it yourself.

Whereas, with coffee, you can buy it pre-ground which makes it much easier to make. 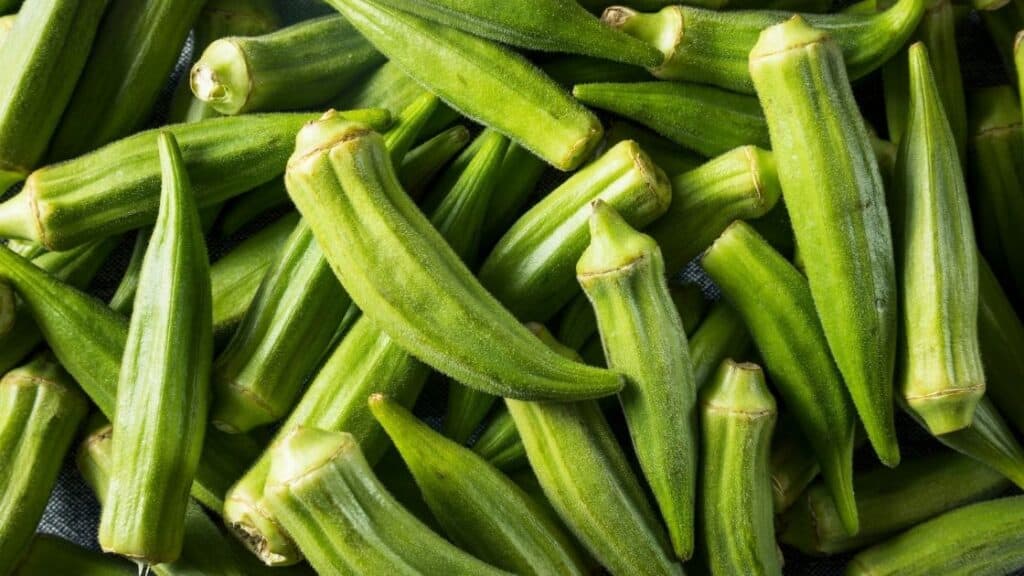 So the okra seeds are high in certain nutrients, and are good for your overall health, but what about the unique benefits of okra, and how does it affect your digestion?

Okra is high in fiber and therefore is good for your stomach and digestive system.

Okra also contains polyphenols which are known to be good for your stomach.

Most vegetables and fruits are high in fiber and have virtually the same benefits on your stomach as okra.

According to WebMD, the foods that are the worst for your stomach health are:

The best foods for your stomach health that they recommend are:

Although okra didn’t specifically make the list, fruits and vegetables are considered to be good for your stomach.

Many people wonder whether okra is a fruit or a vegetable.

I recently looked at the scientific classification of okra, as well as other interesting info about it such as whether you can eat it raw.

I explain it in this article about whether okra is a fruit.

Are Okra Seeds Good for You? 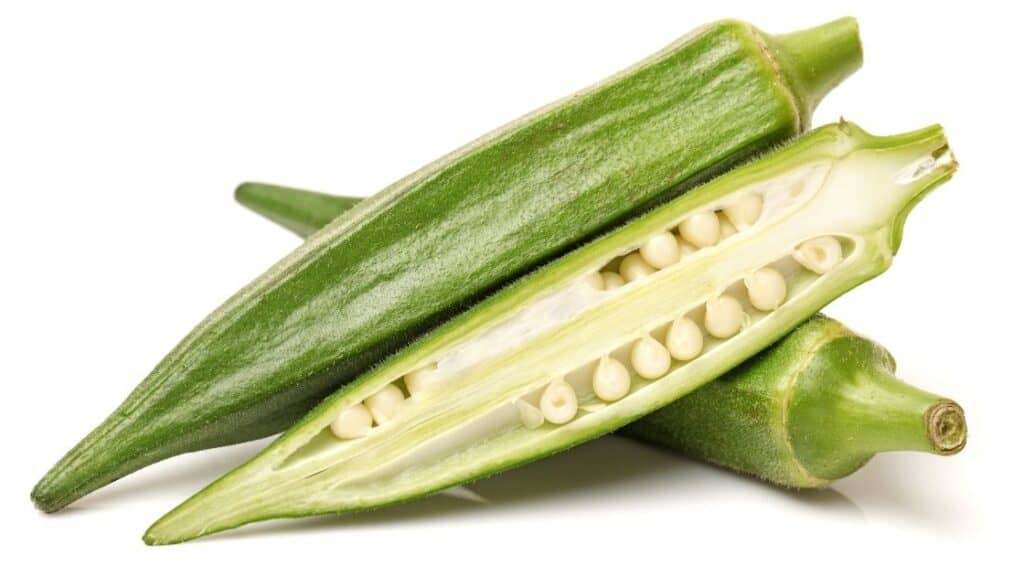 I enjoy eating seeds, and I find them very tasty.

Okra seeds though are less commonly eaten so I hadn’t really heard much about if they are good for you or not.

So, I looked into it, and here’s what I found.

Overall, okra seeds are good for you.

Okra seeds contain high amounts of nutrients that you need to maintain optimal health such as vitamin C, fiber, vitamin b-6, and potassium.

Okra seeds can be consumed raw, roasted, or fried.

However, raw and roasted foods are more healthy, because fried foods are considered bad for your digestive system.

As you may be aware, okra looks similar in appearance to chillis but aren’t spicy at all.

The seeds are also more rounded and not flat like those of a chili.

Is Okra Good For Your Skin? 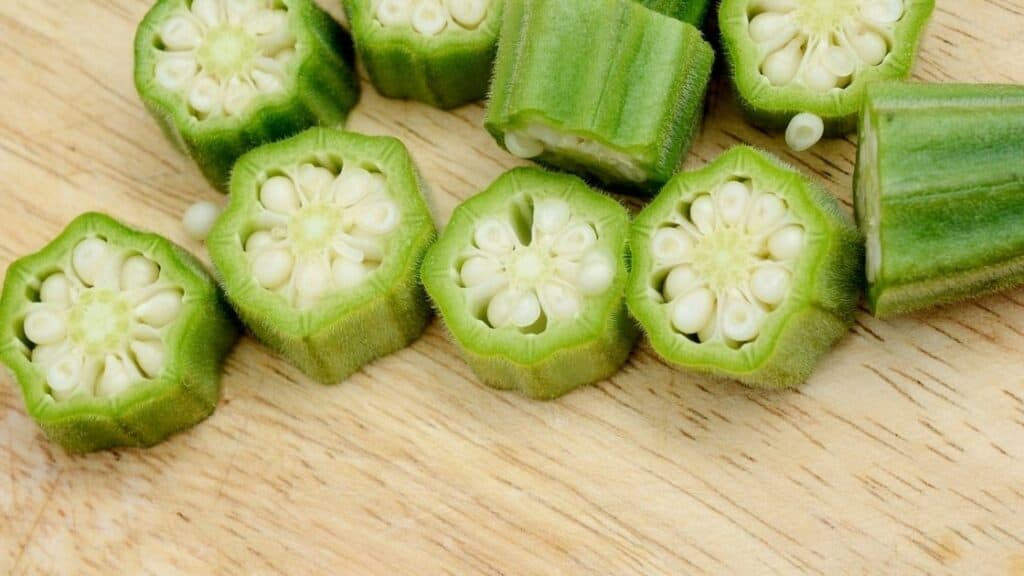 I’ve been looking at improving the appearance of my skin and was considering the kinds of foods that are good for my skin.

So, I was curious whether okra is good for your skin.

Generally, okra is good for your skin.

Okra is high in vitamin C and fiber which is good for your skin.

Fiber improves digestion which causes the body to uptake more nutrients, which improves the health of your skin.

The nutrients that are considered good for your skin my medical professionals are:

Of these, okra is high in vitamin C. So, it’s best to consume other foods that are also high in the above nutrients.

Some of the best foods for your skin are:

What Is Okra Seed Used For? 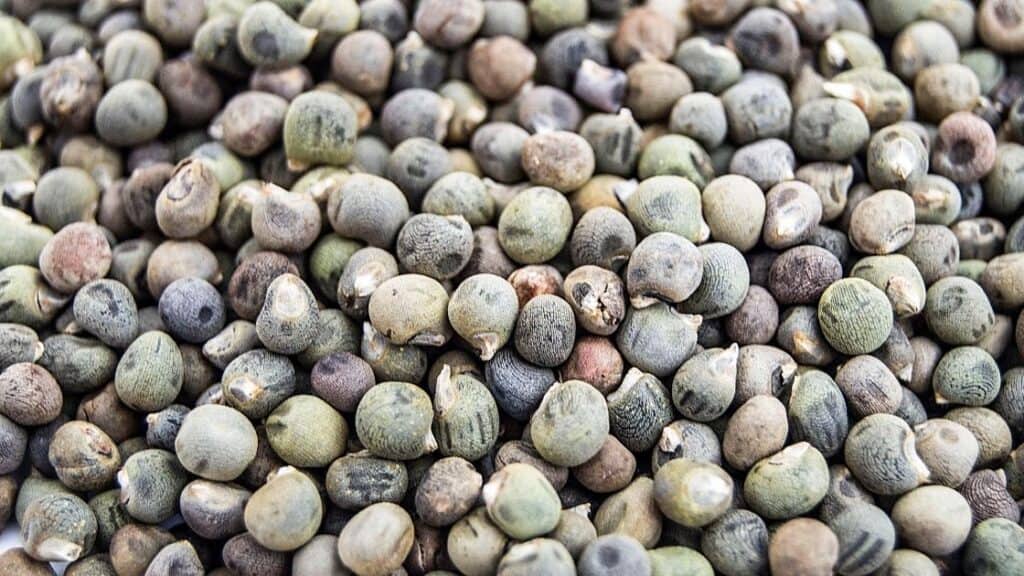 I’d never really heard of using okra seeds until recently, so I looked further into the use of okra seeds.

Here’s a summary of what okra seeds are used for.

Generally, okra seeds are used as a vegetable.

When okra is cooked in various dishes the seeds are left in.

The seeds can also be removed and used on their own raw, or cooked.

Okra seeds are also used as a coffee substitute and are pressed into oil.

In the region around the Middle East and the Mediterranean, okra seeds are used in stews that include other vegetables and meat.

In the West of India, okra seeds are consumed almost everyday.

In the Caribbean Islands to the South East of the USA, okra seeds are prepared in soups that generally contain fish.

It is also characteristic of certain regions.

As you may know, Gumbo is a very popular and well-known dish in New Orleans, Louisiana.

Are You Supposed To Eat the Seeds in Okra? 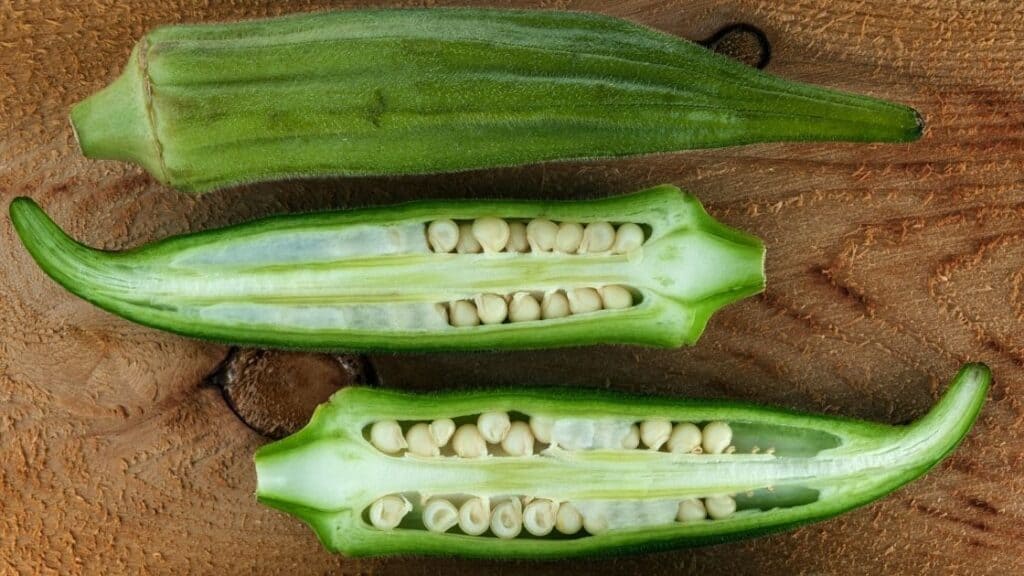 I’ve noticed that when I prepare certain vegetables, I need to remove the seeds.

But, I’ve also cooked with okra a few times.

So, I thought I’d explain whether it’s OK to eat okra seeds and whether most people do it.

Overall, you are supposed to eat okra seeds.

Okra seeds have a pleasant taste and therefore, generally aren’t removed during cooking.

Okra seeds have the best flavor when they are slightly firm.

If an okra seed is squishy and soft when pressed it will generally taste bad.

The seeds of okra create a slimy consistency when they come in contact with water, which thickens stews and soups.

Okra seeds can be removed prior to cooking to stop them from getting slimy.

But, another good way is to cook the okra whole.

That way the slimeyness doesn’t go through the entire dish. And you only experience it when you bite into each okra pod.

When okra is prepared to be fried, generally, it’s simply chopped into slices and tossed into the frying pan without removing the seeds.

However, I suggest trying it with and without the seeds to see which you prefer.