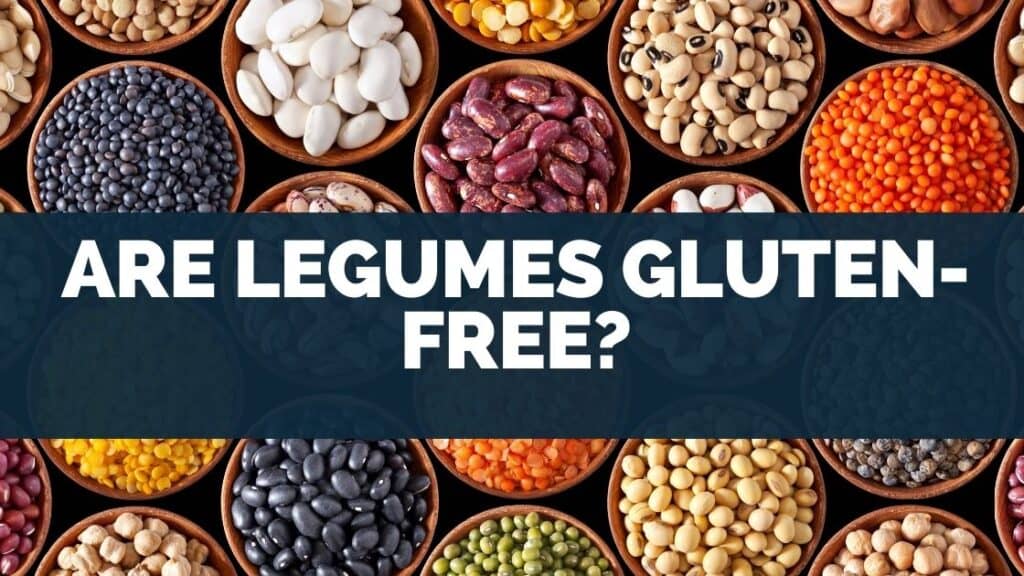 There has been more awareness generated recently around the prevalent problem of gluten sensitivities or allergies.

While a minority of people have life-threatening allergic reactions to the minutest traces of gluten, there seems to also be a significant portion of the population with an underlying sensitivity to gluten that can be the root cause of inflammation, digestive issues, autoimmune diseases, and other chronic health problems.

Gluten is a type of storage protein found in wheat and certain other cereal grains. But is it found in legumes?

Legumes belong to the Fabaceae or Leguminosae family of plants, and depending on the type of legume, may refer to the fruit or seed of the plant.

Legumes are naturally gluten-free, as they are part of a completely different “family” of foods than those in which gluten is found.

Are beans and lentils gluten-free? 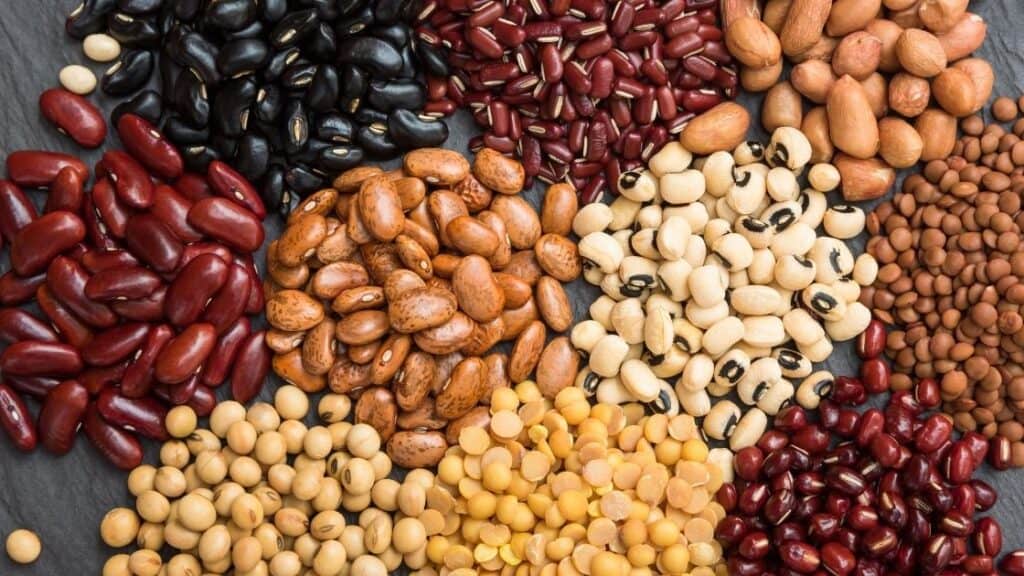 Beans are the seeds of plants in the Fabaceae family, while lentils are plants from the family Lens culinaris or Lens esculenta.

Gluten is a storage protein found in wheat and other cereal grains, and is completely unrelated to beans and lentils.

Beans and lentils are naturally gluten-free.

However, if you have celiac disease, you may need to take extra precautions to ensure safety from cross-contamination with gluten that may occur during the harvesting or transporting of beans and lentils.

If you are concerned about gluten contamination, it would be best to avoid buying beans and lentils from bulk bins and instead to buy them in sealed packages with a certified gluten-free label. 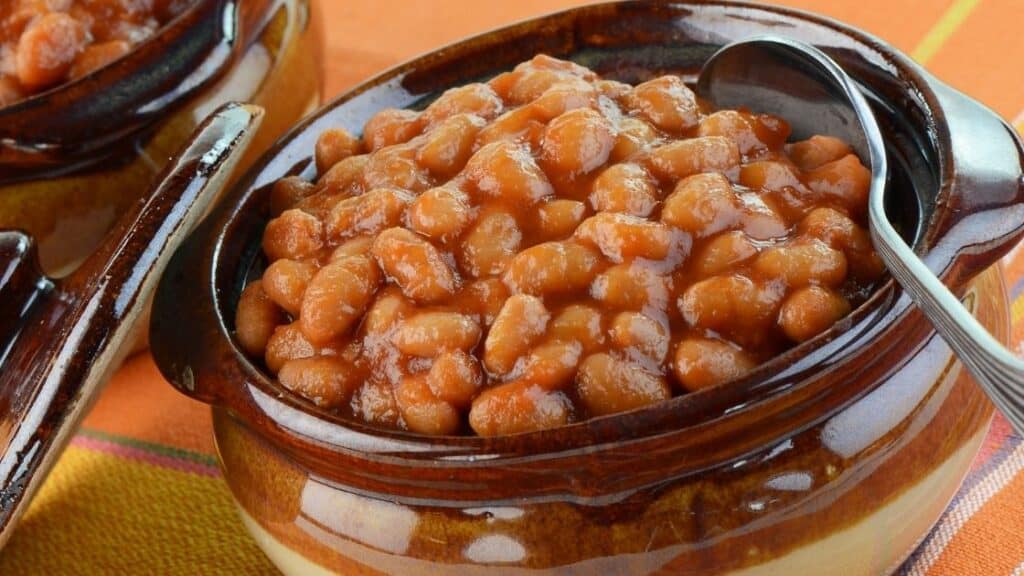 The beans used to make baked beans are naturally gluten-free, so if you make them from scratch they should be gluten-free, unless you add gluten-containing ingredients.

Not all canned baked beans, however, are gluten-free, as some may contain gluten-containing additives.

If you have celiac disease, it would be best for you to prepare your own baked beans to avoid contamination, or buy only those brands of canned baked beans that you trust.

The history of baked beans is fascinating!

Baked beans originated with native Americans as a dish of white beans that were made by first parboiling (or partially boiling) the beans, then baking or stewing them in a maple syrup-based sauce.

English colonists adopted the dish and modified it, sometimes including brown sugar or molasses in the sauce.

Boston baked beans, for example, used salted pork and molasses in order to avoid British taxes on sugar during the 18th century.

Baked beans have since grown in popularity, particularly in English-speaking countries.

As discussed earlier, beans are naturally gluten-free, so if you make your own baked beans from scratch, you will have control over the ingredients you use to ensure that the dish is gluten-free and safe for people with celiac disease.

What ingredients should I avoid on a gluten-free diet? 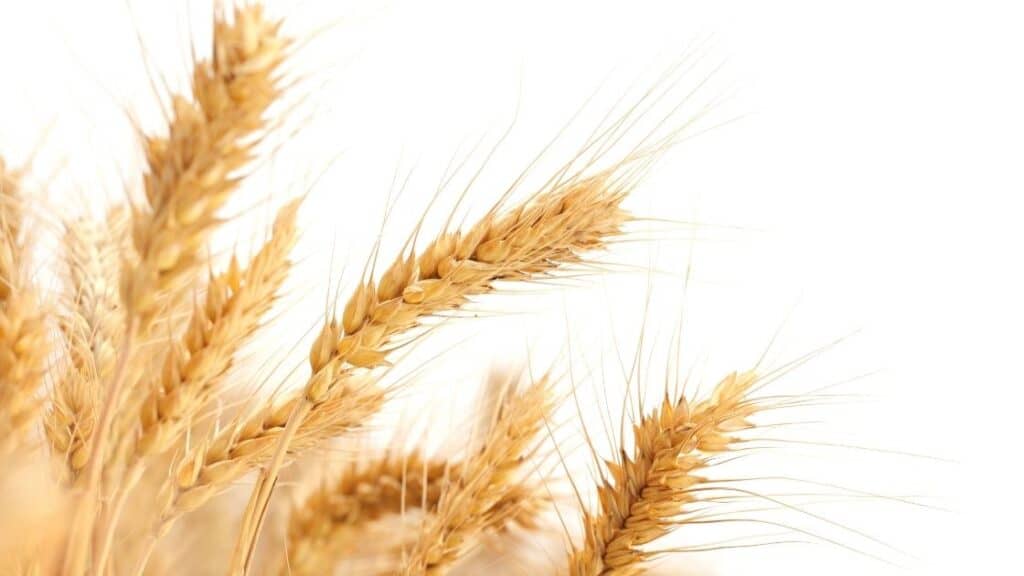 Gluten may also be present in some ingredients used in processed foods, such as malt, soy sauce, and starch fillers.

If you have celiac disease, even trace amounts of gluten can trigger an intense allergic reaction, so you have to become an expert at reading ingredient labels.

Avoid these grains and any foods made from the flours, as well as any processed foods that use these ingredients in the manufacturing process:

Aside from the grains listed above, there are other ingredients that you should question and do additional research to ensure that they are safe:

When in doubt, consult a resource such as the Food and Drink Guide produced by Coeliac UK, or contact the manufacturer of the product in question.

Which baked beans are gluten-free in the UK? 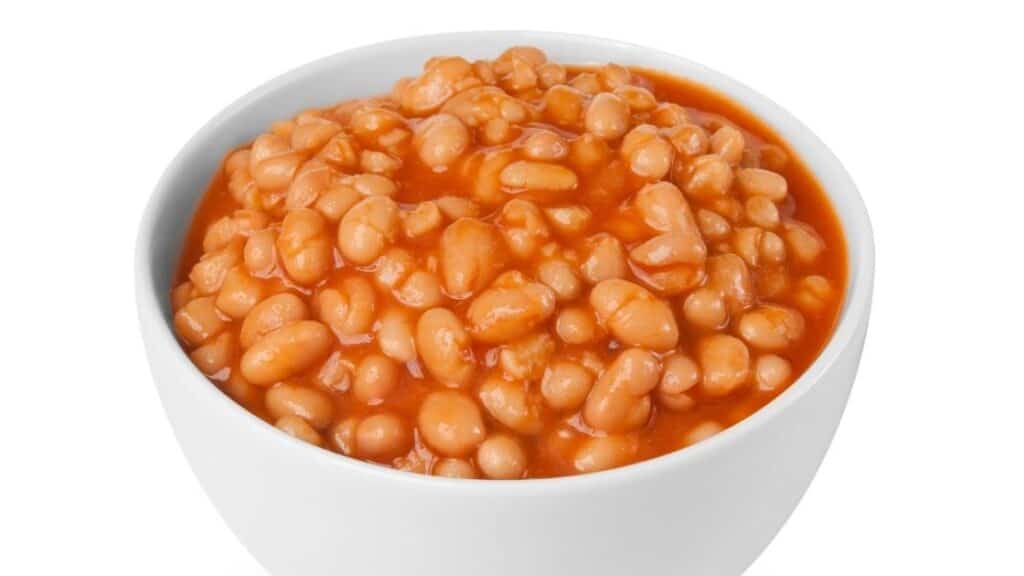 Branston’s Classic Baked Beans is another type of canned beans that claim to be gluten-free.

Other smaller or lesser-known brands may also be gluten-free, but you may need to contact them directly for confirmation.

Isitglutenfreeapp.com may be a good resource for you to consider when researching specific brands and products of baked beans in the UK.

Are baked beans gluten-free in Australia? 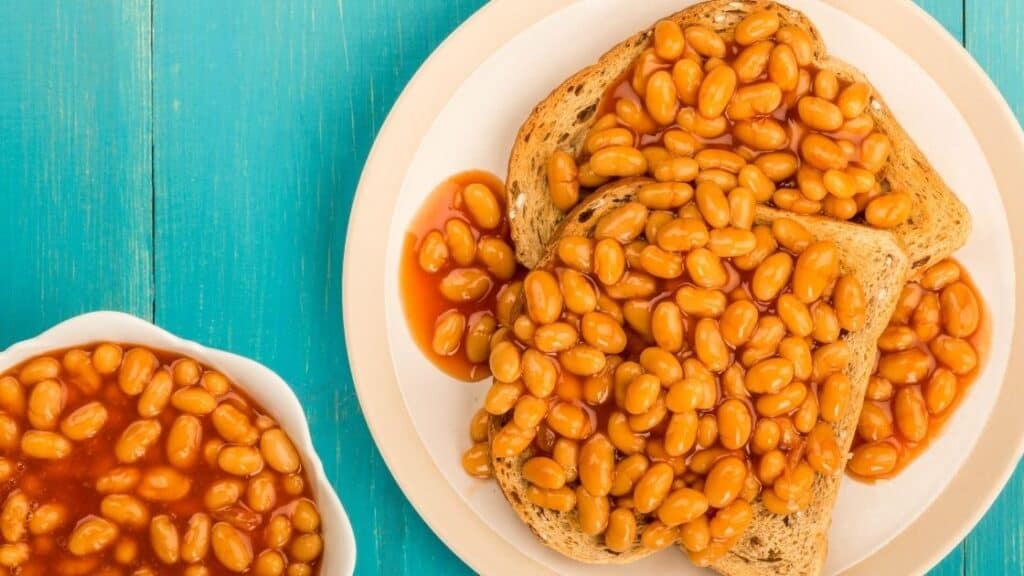 Whether or not canned baked beans are gluten-free depends on the brand.

Heinz promises to be gluten-free, there are many other products available in Australia that do not have any gluten-containing additives.

These products include SPC Aussie Made Baked Beans and Woolworth Baked Beans in Tomato Sauce.

Check out choice.com.au for more details.

Why do I still have digestive symptoms even after eating gluten-free beans? 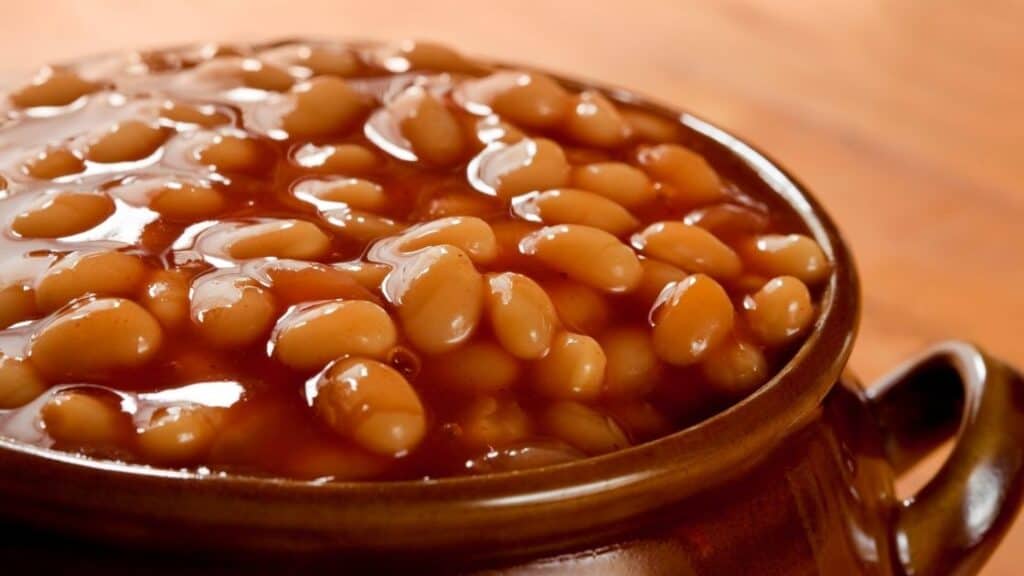 Gluten is not the only plant compound capable of causing digestive issues.

Beans contain high levels of lectins, which are also known to cause both transient digestive symptoms (nausea, bloating, gas, etc.) and long-term digestive issues such as IBS.

Gluten is a compound known as a “lectin,” which refers to a type of protein that exists in high amounts in certain parts of plants (usually in the roots and seeds) that binds to glycoproteins within our cells when we eat them.

Lectins harm humans by binding to ribosomes within the body and disrupting protein formation within cells.

Lectins are part of plants’ unique chemical defense systems, which evolved to protect them from being eaten by doing harm to the animal that ate them.

Beans do not contain gluten, as we have seen.

But they do contain other lesser-known types of lectins, many of which are known to cause digestive distress and long-term damage to both the digestive system and other cells in the body.

Studies in rats who have been fed PHA have shown damage to the intestines, pancreas, liver, and thymus, as well as a loss of muscle mass.

It’s true that certain methods of treating and cooking beans (i.e., cooking at high pressures and high temperatures) can reduce the levels of lectins that are consumed.

But if you are particularly sensitive to these compounds, digestive symptoms could be triggered from consuming even small amounts.

This is why you may still have gas, bloating, constipation, diarrhea, or other digestive symptoms after eating beans — even though beans are naturally gluten-free.

Should I eat legumes if I have a gluten allergy or sensitivity? 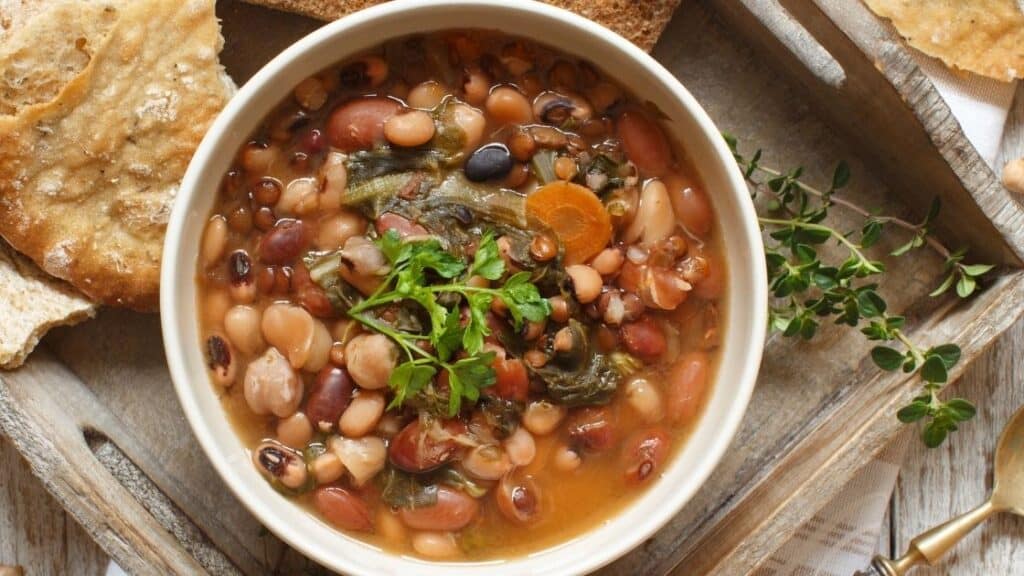 Celiac disease is characterized by a condition known as “leaky gut,” which means that the intestinal epithelium has been perforated.

Even though beans do not contain gluten, they do contain other types of lectins that may exacerbate leaky gut and cause further damage to the intestines.

If you have celiac disease or a gluten sensitivity, it may be a good idea to remove legumes from your diet as well, at least for a period of time, in order to allow your gut to fully heal.

A low FODMAP diet may be a good place to start if you are looking to heal your gut.

A low FODMAP diet serves as an elimination diet, in which you remove potentially harmful foods from your diet for a period of time to see if your symptoms improve, then reintroduce them to observe their effects.

According to the Hopkins article linked above, “FODMAP stands for fermentable oligosaccharides, disaccharides, monosaccharides and polyols, which are short-chain carbohydrates (sugars) that the small intestine absorbs poorly.” Foods high in FODMAPs include:

Instead of the above foods, you would orient your diet around low FODMAP foods, like meat, eggs, seafood, certain vegetables such as cucumbers and zucchini, certain grains such as rice, and certain fruits such as strawberries and blueberries.

After a period of time on this stricter diet, you would then slowly and strategically add in higher FODMAP foods, then observe any change in your symptoms.

Some people may be able to tolerate higher FODMAP foods after their gut has been allowed to heal.

Other people may need to remain on a strict low FODMAP diet for a longer period of time in order to maintain good digestive health and avoid reappearance of symptoms.

So in short, legumes do not intrinsically contain gluten.

However, they do contain other compounds, especially lectins, which can cause damage to some individuals’ digestive systems.

As with everything, it’s important to run some personal experiments to discover how well you tolerate certain foods.